We had a wonderful time producing what just might be the most contemporary theatre that’s been done in downey since the days of John Hume.  Four new plays, presented as staged readings, at four locations around Downey.  Best of all, it used the talents of a lot of creative people that have local ties.

On May 6th we had “In Case You Forget” by Ben Snyder, about a New York graffiti artist on his way to prison.  Around 70 audience members showed up to watch the talented actors from Urban Theatre Movement, a company born out of the greater south-east LA county.  UTM recently produced a successful run of “Short Eyes” at the Los Angeles Theatre Center in downtown LA.  UTM member David Santana directed the reading. 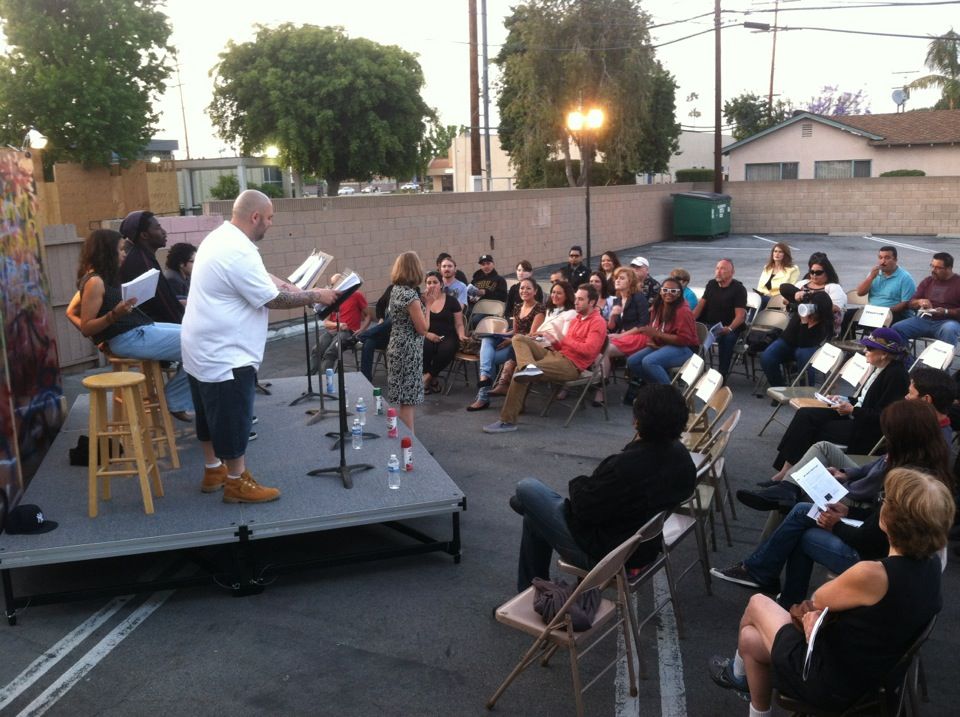 Presented in the back parking lot of Number 34, a new barbershop near Florence & Lakewood Blvd.  The street art theme was continued with a small art show in the front parking lot. 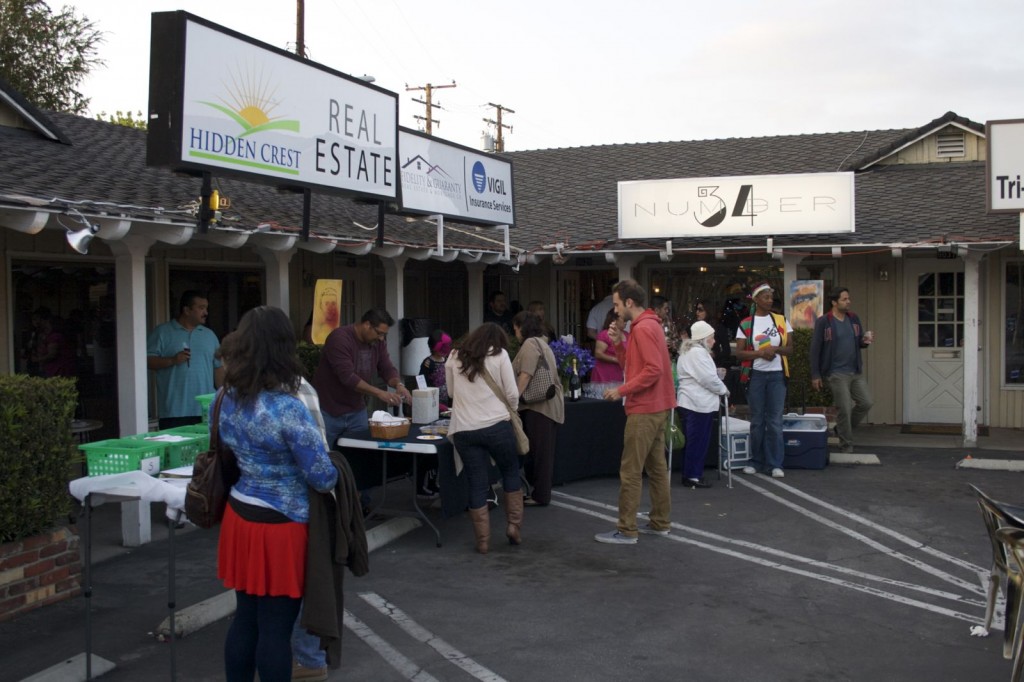 The highlight of the show was two extra wooden utility boxes that the public was invited to spray paint on themselves.  Roy Anthony Shabla, who curated the show, had a piece of street art painted over by the city of Downey– the middle utility box that is now gray was formerly a work of art that Shabla designed and painted without city permission.  The police stopped by, but were happy to discover that the utility boxes in question were only fake props. 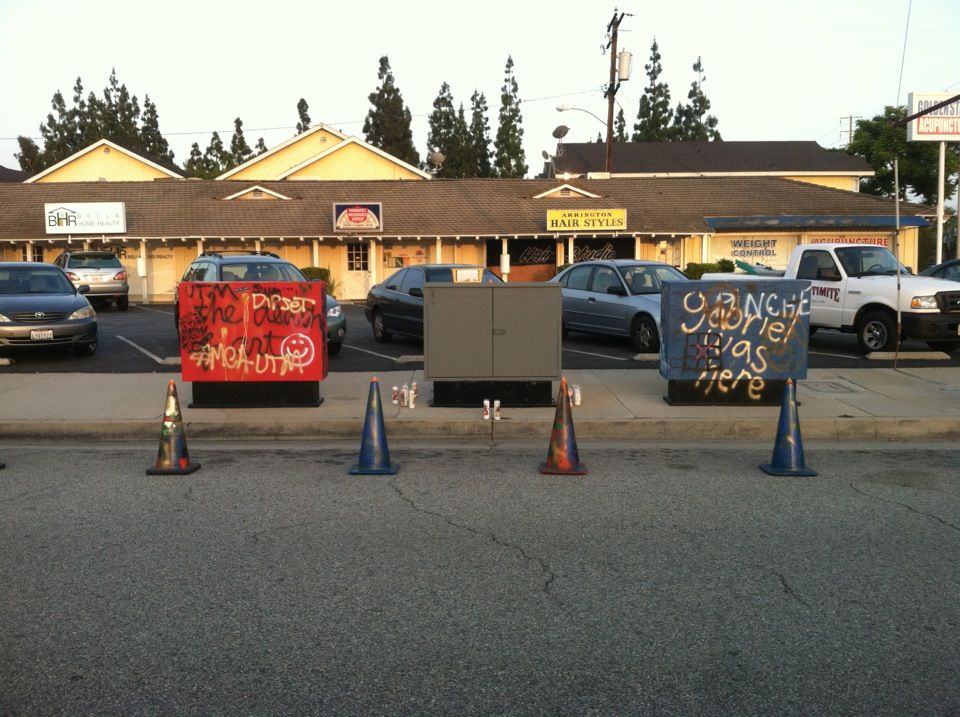 Two weeks later we moved to Granata’s & Tapas on Downey Avenue in their banquet room to present two one-act plays, “La Vida Lucky (1974)” and “El Bobo Bruto (1951)” written by Daniel Houston Davila.  Houston hails from neighboring Norwalk, and wrote a comprehensive historical novel Malinche’s Children about the Carmellas, a migrant worker bario located near Rosecrans and Shoemaker in Norwalk.  The plays were workshopped in the Casa 0101 playwriting program, and this is their first public reading.  Long time Downey resident Alistair Hunter directed the reading. 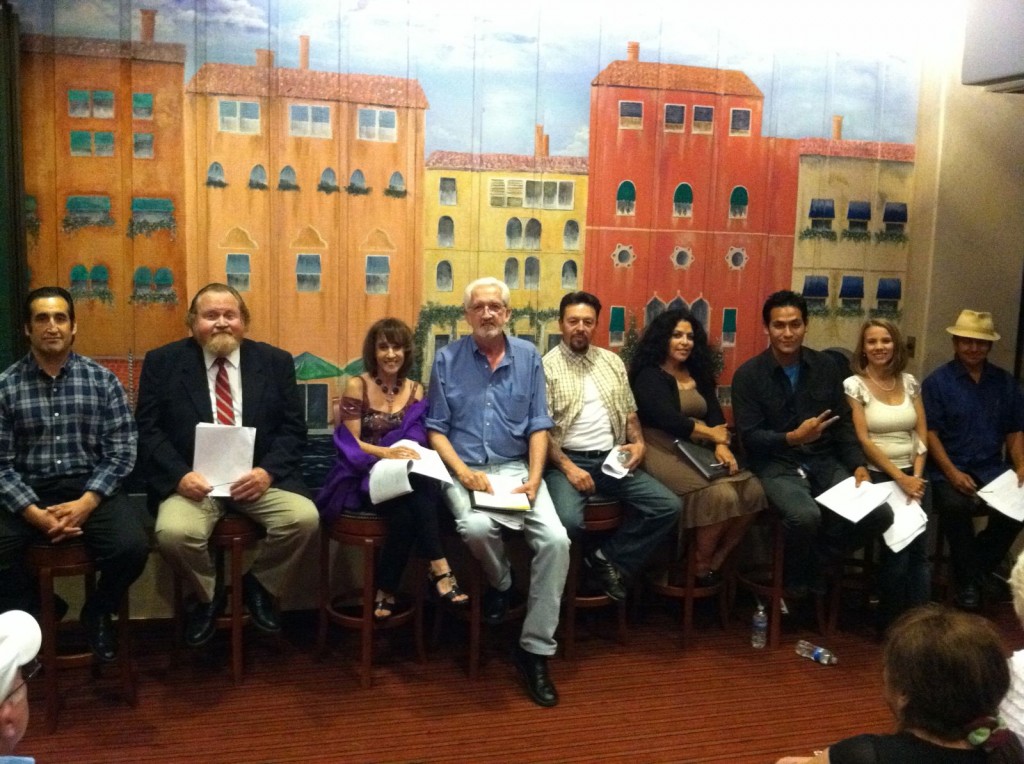 Much of the audience turned out for dinner beforehand, or drinks after the reading.  It felt good to pack out the restaurant. 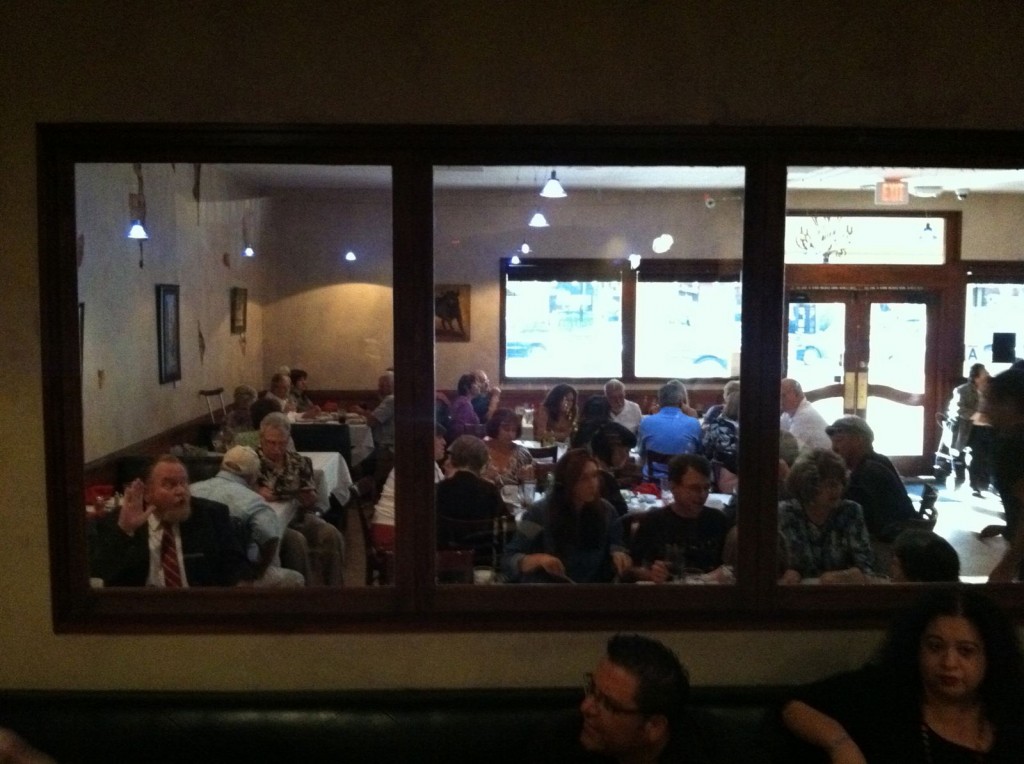 For the reading, the banquet room was stuffed with over a hundred people, standing room only.  The Q&A included interaction with some locals who grew up in the Carmellas and experienced many of the same things in their lives. 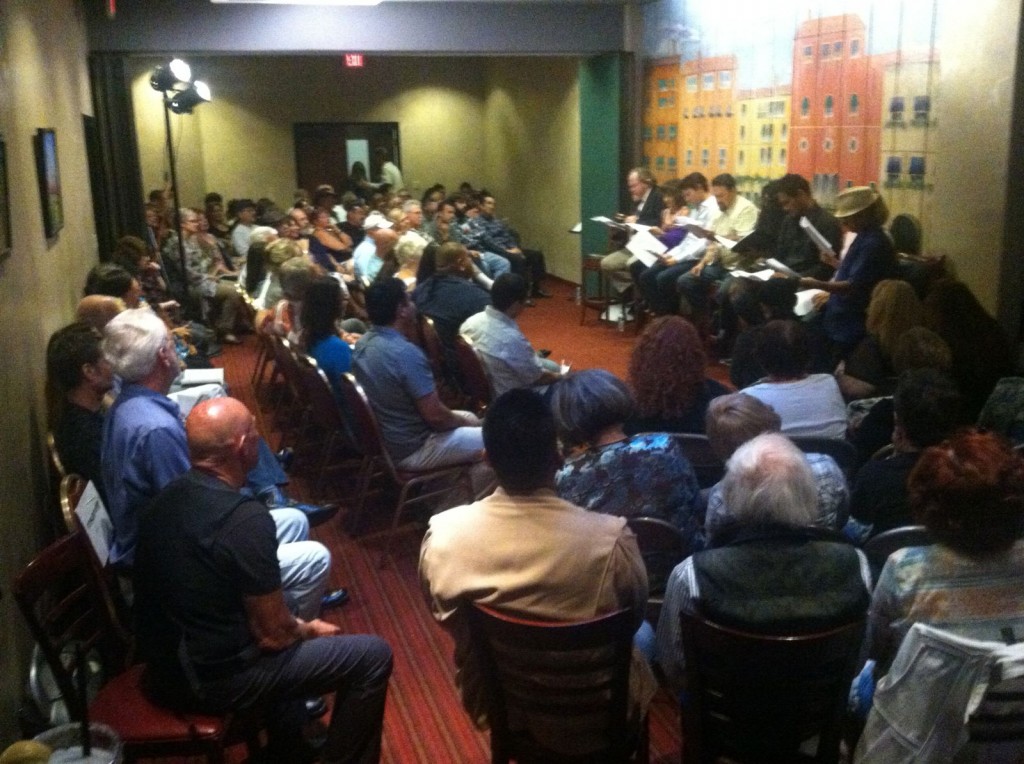 The next week we were back with Urban Theatre Movement, with “Handball” written by Seth Zvi Rosenfeld, and directed by Downey resident and UTM founder Paul Tully.  Tully has been one of the driving forces behind the reading series, and has championed this play about a New York neighborhood’s struggle with gentrification.  Playwright Rosenfeld was in attendance and joined the Q&A afterward.  The Epic Lounge on 2nd Street downtown hosted the event, with about 50 in attendance. 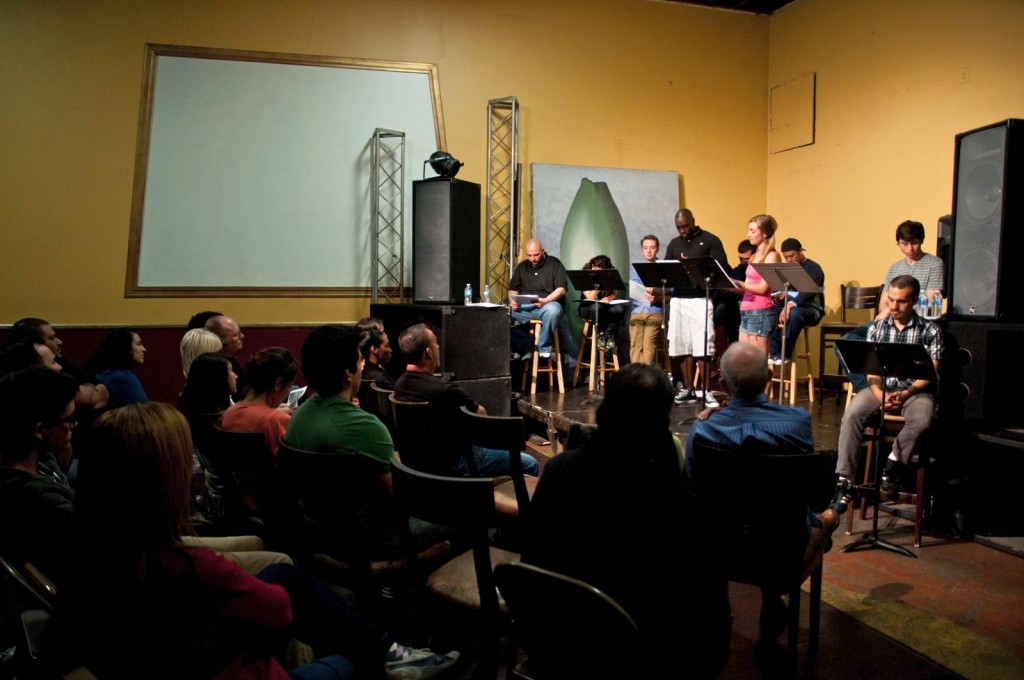 Finally on June 3rd we presented “Alexander the Greatest,” written and directed by Forrest Hartl, a Downey resident and one of the producers of our series.  The audience of about 65 laughed their way through the roller coaster of an amateur actor’s rise to fame through cutthroat tactics. 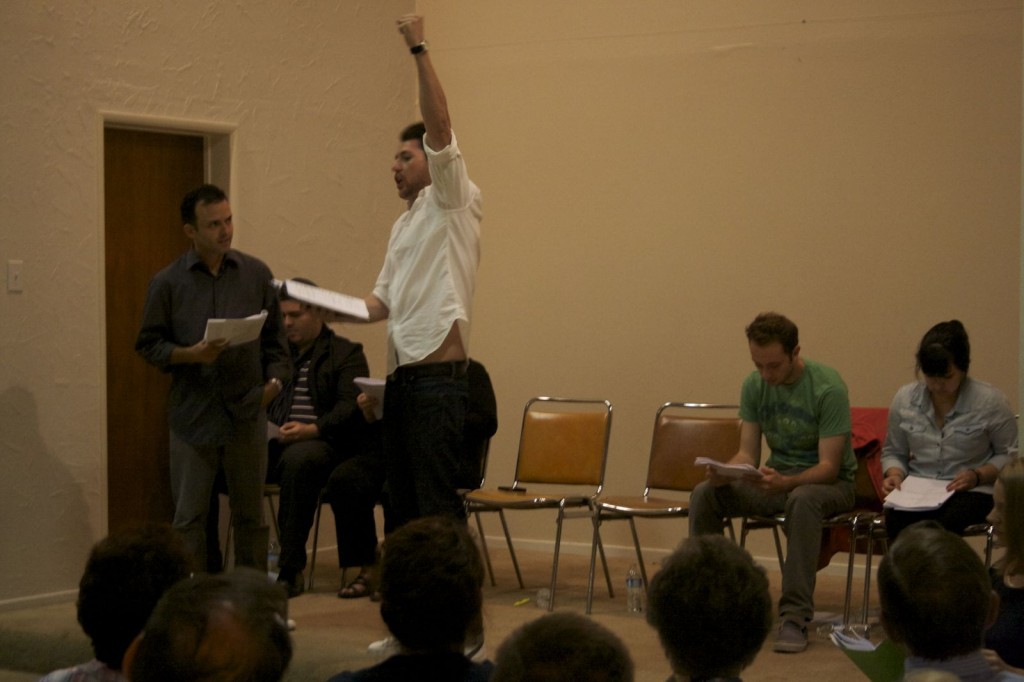 The Downey Moravian Church on Old River School Road hosted the evening in their Hove Hall. 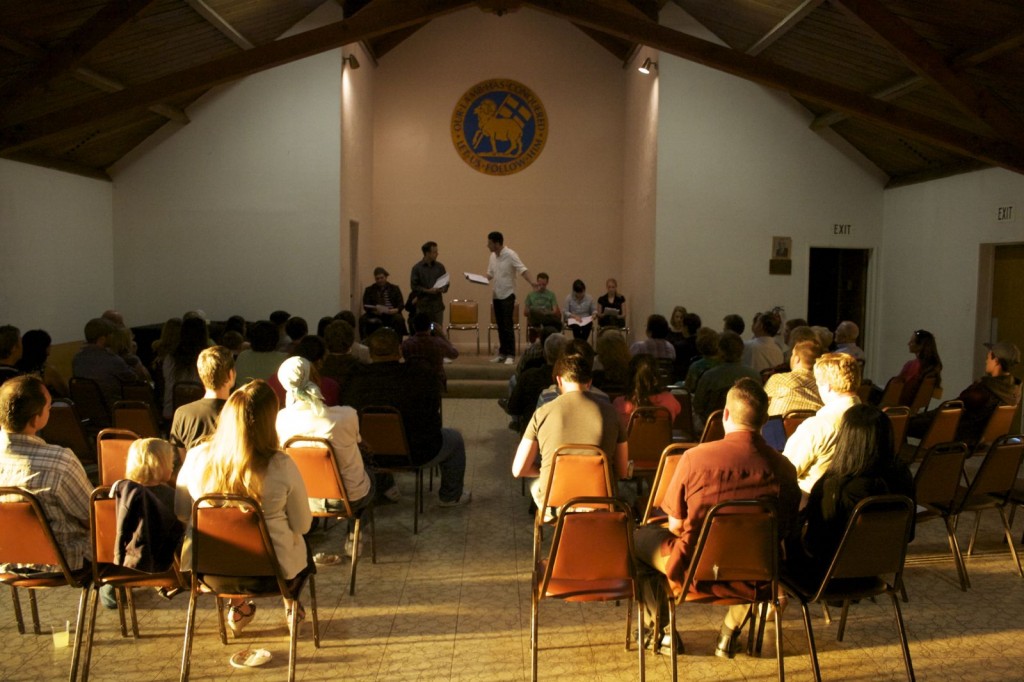 We enjoyed a spread of snacks and cake to celebrate the end of the series and thank everyone for seeing it through.

The audience response on “Alexander” led us to select the play to produce as our first workshop production, tentatively scheduled for September of this year.  Currently Downey does not have a theatre showing contemporary plays produced by professionals.  We’ve set out to change that, so I hope you’ll join us as we continue the work.  There are also more staged readings planned for the future.

Special thanks to the producing team, led by Lana Joy Wahlquist, Paul Tully, Forrest Hartl, and myself.  We also could have done it without the volunteer support of many from the DAC and UTM who put the pieces together.

Here is the UrbanActs_Playbill as a PDF, though it is in printing order so you’ll have to read it creatively.

Last, here is a gallery of photos from the series.