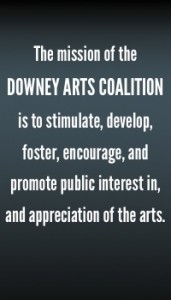 The Downey Arts Coalition is a non-profit California corporation, and tax-exempt under the IRS code section 501(c)(3). We are the successor org of Downey Art League, the original Downey arts community organization incorporated in 1968 and founded in 1955. See our Exempt Status (Click here)

We seek to present new opportunities for local artists to show their work, local theatre artists and musicians to perform, local poets to have a place to read, and local filmmakers to have a place to screen. For the community, we seek to provide new artistic experiences not commonly found in our area of Southeast LA County. Your donation can help bring some of our ideas to life.

It’s easy to donate via Paypal, sign up below.