On Tuesday night March 13th, the Downey City Council will consider an amendment to it’s “Art in Public Places” ordinance, to allow the city to support city venues that display art for the public.

Much of this change is due to the tireless behind the scenes work of the Downey Art Vibe and it’s founder Valentin Flores, who has drawn up an extensive proposal for the city to support a public art gallery downtown.  The gallery would become the home base for a growing movement among creatives in Downey to re-cast the city as a hub or artists and creatives.  The gallery would host artwork by local artists, opening galas, and even “spoken-word” events such as play readings, and poetry.

This city has been struggling to find its voice when it comes to using the pooled funds collected by the AIPP ordinance.  The reserved money has been used to support projects such as the bust of John G. Downey and the Police memorial next to city hall.  It was also adapted to include painted murals, such as the Avenue Theatre mural and utility boxes.  Supporting the rent and expenses of running a community art gallery would be a marked change from the original ordinance, but is not unusual when looking at what other cities support with similar funds.

What remains to be seen is how the shuttered Downey Museum of Art can be included in the mix.  The Downey Beat mentions this also as a way to support the museum as well, however the city currently has no plans in that regard.  Although there could be opportunities for the DMOA to form an alliance with the new gallery suggested by the Downey Art Vibe, the newly re-formed DMOA board has still been pushing the city to allow them to re-open in their original space at Furman Park.  In discussions with the city, the museum board members have warned that this is a critical time in the history of the museum.  If they are not able to put the museum back together in a way that the public can access the collection, the Attorney General’s office has threatened to force them to give away their 400 pieces of artwork to another museum collection and dissolve their organization.  The Downey Museum of Art claims itself as the first contemporary art museum in Southern California.  It self-destructed in 2009 after a complicated series of events.

The amended ordinance will be introduced at the 7:30PM meeting, held at Downey City Hall.  Should it pass, it will come again for a final vote in two weeks. 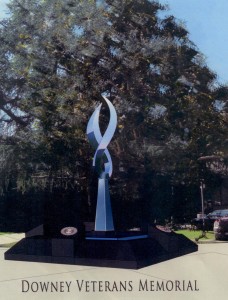 Also up for a vote: the city’s proposed Veteran’s Memorial, funded by Art in Public Places, which is designed by James T. Russell in a similar fashion to the war memorial in neighboring city Cerritos.  Read about it in the Downey Patriot.

**UPDATE: The motion passed 4 to 1 last Tuesday.  It comes up for one more vote in two weeks.