This month, The Green Salon merges with the annual, world-wide cultural event promoting peace, equal rights, and ecology, 100k Poets for Change.  As usual, the salon will include fine art, live music, poetry reading and an open mic… but this month also features political discourse on sustainability, poetry and prose writing workshops, a full-length feature film, and a small art fair.  Vintage political t-shirts will be available at the marketplace.

Since its founding in 2011, 100k Poets for Change has been working with poets, artists, musicians, and other creatives to organize events around the world for serious social change.  The Green Salon has collaborated with 100k Poets from the beginning.

Come meet the Mayor of Downey, Sean Ashton, and speak with him about the upcoming mid-term elections.  He is a staunch supporter of civil rights and will share his thoughts on the current political climate with us.

The salon begins early, 5pm, with writing workshops hosted by ZZyZx WriterZ, Ivan Rios, and a poetry/craft workshop by Terry Walker and Frank Kearns.  There will also be the opportunity to have your writing critiqued.  Be inspired, hone your skills, and share your work at the open mic. 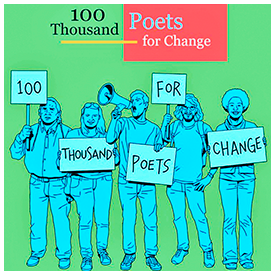 The featured musician for the event is Richard Torres.  He is a composer of atmospheric, Zen-like music regularly performing at cultural events such as the Green Salonand the Lotus Festival, hosted by the City of Los Angeles.  He will perform throughout the day, often on rarely-known musical instruments.

The featured poet is Sarah Thursday.  Her new book, Conversations with Gravel, is a highly-praised mosaic of love poems which she will perform.  Copies will be available for purchase and autographing.

There will also be a table of vintage classic books for sale.  Most of those authors, however, will not be available to autograph their work.

The evening will include a full-length feature film on world humanity projected under the stars.  It is an engaging story not to be missed.

The Green Salon is the longest-running monthly cultural event in the Downey area.  It is the fourth Saturday of the month and it is always free.

Because of Halloween, Thanksgiving, and the Winter Solstice, this is the last salon of the year –everyone will be occupied with parties in the following months.  Once again, The Green Salon will be held at the art studio of Roy Anthony Shabla.  He will display Halloween paintings for the event.

(Near Bloomfield and Lakeland, off Florence or Imperial)