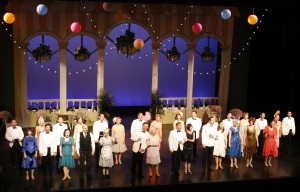 It seems the trend today for community civic light operas to go by the name “Music Theatre” as in “Downey Music Theatre” and shed the old, confusing name.  Perhaps a way to go?   A question like that may never have the opportunity to be debated, however.

A conflict has arisen between the city of Downey who operates the 738-seat Downey Theatre, and the 58-year-old organization that has mainly been the only theatre company to call Downey home.  It’s a tension between the past and the future, between a cash-strapped city and the cash-strapped arts organizations that need every favor they can get to survive.

Here is the recent story from The Downey Beat.

As of July 1st, Downey raised the rent on the Downey Theatre, and canceled their long tradition of allowing the Downey Civic Light Opera and the Downey Symphony to rent the theatre for a generously discounted price.  This puts our long-standing, traditional institutions in a bit of a financial tailspin as they figure out how to react to the new world order.  In addition, VenueTech, the management company contracted to operate the theatre, wants all shows at the theatre to accept the terms of their modernized box office.

Both of these new requirements are cited as reasons why the DCLO believes that their fall show, beginning in late September, might be their last.  The only way to continue the rest of the 2012-2013 season would be if the city decides to back off on the increased fees.  Marsha Moode, who has run the theatre company (primarily single-handedly) for the past 13 years has fought hard to maintain the status quo, keeping the shows, production values, and the budgets from changing.  She has generally been able to keep the company breaking even, despite an audience that has dwindled over the years.

The Downey Arts Coalition was formed in part to help breathe new energy into our original arts groups, such as the DCLO.  We would like to work with Ms. Moode and discuss what the future might hold for the music theatre company.

DAC performing arts guru Lana Joy Wahlquist paid a visit to Tuesday’s city council meeting.  We knew Marsha was bringing her case before the council in the public comment section, and we also wanted to speak on behalf of the future of theatre in Downey.

The text of her speech is below:

Good evening, Mayor Brossmer, Councilman and caretakers of our city.  My name is Lana Wahlquist, and with my husband Andrew founded the Downey Arts Coalition, a community service group, to promote and advocate for the arts in our city.

With respect to Marsha Moode’s presentation tonight, we want to stress that we believe the Downey Civic Light Opera is an essential and beneficial part of our community, both economically for local businesses, and culturally enriching to our residents.  They present some of America’s most beloved music and drama.

As one of the few remaining large community musical theatre compoanies, it is a badge of honor for Downey, as well as a testament to our 58 year history of theatre in Downey that began with John Hume and the Downey Children’s Theatre.  This institution is bigger than any one person or program.  It pre-dates Downey’s own incorperation, and is the only theatre company Downey has.

It may seem like privileged treatment that the Symphony and the DCLO enjoy special favors and lower fees at the theatre.  But remember, these two institutions built the Downey Theatre in 1970, both insisting on its existance and justifying it.  Back when it was built,  the Children’s Theatre never had to pay rent to use the building.  It could have free office space and costume storage downstairs, because the staff and the costumes belonged to the theatre, there was no difference.

This is the legacy of support that is being destroyed by eliminating the discounted rates they’ve traditionally received.  Their rates have now more than doubled.  Over the course of their season, the DCLO would be facing $30,000 in additional fees. The City of Downey will never see this money, because literally the DCLO will cease to exist, and the Symphony might not be far behind it.  Every other publicly owned theatre in the area has a discount for local non-profits.

Now, I know many of you are supporters of the arts movement that has caught fire in the city over the past couple years.  With the success of all the past year’s events led by the Downey Arts Coalition and the Downey Art Vibe, we can show with certainty that there are artists and performers alive and talented in our area, just begging for an outlet to their creativity, and there are audiences hungry for it.

One of the Coalitions’s biggest goals is to bridge the gap between this new, energized, and motivated group of people, and the long-standing traditional arts organizations that have been declining in recent years.  We’ve already started a healthy developing relationship with the Symphony, as well as the group tasked with reviving the Downey Museum of Art.  And while we’ve reached out to Marsha Moode, we unfortunately have not been able to work closely with her on the future of the DCLO.

We commend Marsha Moode for single-handedly managing the daily operations of the DCLO and for the meaningful theatre she has produced, that we have all enjoyed. But we also believe strongly that if an organization is receiving help from the public, then it has a responsibility to the local community and the public trust.  Accountability and inclusiveness are essential.

The city needs to return to offering discounted use of the theatre for approved Downey non-profits.  The DCLO is worth saving, for the benefit of the city’s residents and stature.  Likewise, the DCLO must show willingness to develop and broaden their audience, involve new people, and create a plan for sustainability.

There needs to be a plan for the future. The Downey Civic Light Opera should not retire with Marsha Moode, and certainly should not end in this fashion. We as a community love this company. Let’s put it back in the spotlight.

Photos from No, No, Nanette