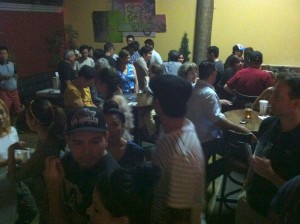 True, we packed out the house at the Epic Lounge for a screening of a new short documentary about Bumblebee.  We were excited to have Downey filmmakers doing a film on a Downey artist that has a regional following, and to present the event here in our community.  All ages were represented, from 1 to 90 years old (yes, I brought the baby).

But the full story of how this came together really gets at the core of what the Downey Arts Coalition hopes to accomplish by developing a local creative community and an arts&culture scene.  Our hope is that future generations of creative individuals will live in a city that they feel has fostered and inspired their art.

I say this as a Downey kid who wanted to become a filmmaker, but had to scrape around for ways to develop my skills in town.  I found a couple mentors, but I was mostly self-taught in my student filmmaking adventures.  There weren’t any legitimate examples of a film-culture here in Downey.  We didn’t even have the Krikorian when I was in high school, only 2nd-run double features at the Avenue Theatre.  As far as any real training for film in the city, there was none.  I always knew that the only place to find the “real thing” was to go up to LA and try to find my way among a sea of other wannabe writer/directors.

To do what I wanted to do, I would have to leave.  And many of my artistic friends did leave.  The loss of creative, ambitious young adults damages a community at its core.  But somehow I never really left.  I’ve always worked in Los Angeles and Hollywood, but never could talk myself into moving north-west.

One of the ideas that changed me recently was a realization that there is power in the place you are from, the place you live, and the people around you every day– many whom you already know and trust.  Much of the activism world has jumped on the “Local” bandwagon, and now I believe it is time for the arts to “go local” as well.

Back in 2010 when I decided to form a group called the Downey Arts Coalition, one of the first artists that I contacted was Pam Lane and Joan Anderson of DowneyDailyPhotos.com.  Pam, Joan and Allison Mansell were doing the photography version of “art local” on their blog.  They saw their hometown of Downey as a valuable resource, a subject they could explore, and a potential audience for their photos.  They joined in the conversation right away. 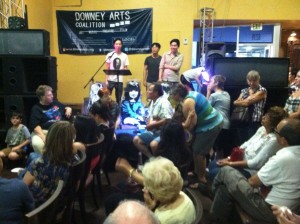 Last year in April, Pam was photographing a local church, when she met a young man named Julian Park, who was a videographer and was already a fan of their photo blog.  They connected about Downey and photography.  Throughout the year the photo blog featured several images of Bumblebee’s artwork, which had captured the city’s imagination.  Julian learned about Bumblebee, his work, and his Downey roots from the Downey Daily Photos blog.  He decided to track him down in order to make a documentary film about his art and motivations.

Bumblebee talks in the film about growing up in a city that lacked much creative expression, or any kind of art scene at all. 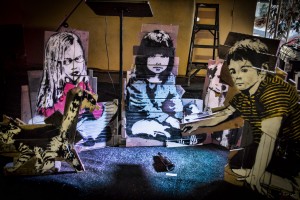 But he was motivated to express himself, creating street art and other works because he had to, long before he would start to legitimately sell his work.  He had an affection for his home town, which led him to create things here.  Once again, using his community as a resource rather than a hinderance.

Over the course of the months where Julian Park, Joseph Kim and their teammates of HandiMade films were following Bumblebee, the Downey Arts Coalition also reached out to Bumblebee to talk about the local arts movement and if there is a way that we could do an event together.  When it came time for the documentary short to be finished, Bumblebee approached us about hosting a premiere screening for it in Downey, plus a mini art show.  We didn’t hesitate. 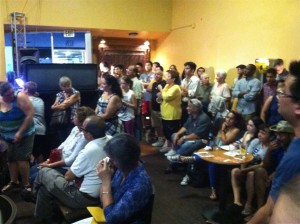 DAC member Don Lamkin set up the event with the Epic Lounge, and worked out a deal to do the event for next to no money, keep admission free, and still benefit everyone.  The DAC promoted the event, wrote a fantastic article about the film, secured permission for a new large mural on the building, and the audience was spilling out the door.  The evening was by far a moving experience for many people, including the arts community, the filmmakers, the artist, and their parents.
The cycle was complete when Pam Lane and Joan Anderson showed up with their cameras to document the evening on their blog:  First about the event itself, then about the filmmakers behind the film.

Because of the creative community we’ve been building, and that these artists are expressing themselves here in their own city, these pieces were able to fall into place.  And the event has now inspired new artists to go out and do the same.  It will be exciting to see how the seeds grow.

Last, it’s not insignificant to mention:  Julian was planning to move to New York for a video gig, and after the experience of this event has decided to stay in town for now, pursuing opportunities here.

Bumblebee Loves You from HANDi on Vimeo.