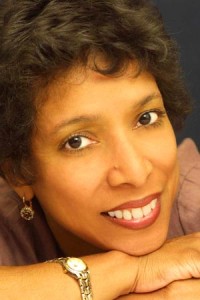 Lynne Thompson has great stories to tell, due to her unusual heritage: she is part Caribbean slave from the Grenadine island of Bequia, and part Native American. Extroverted, declarative, jazzy and vital, Lynne Thompson won the 2007 Perugia Press Book Prize for her first full-length collection of poems, Beg No Pardon.

Beg No Pardon was also awarded the 2008 Great Lakes Colleges Association New Writers Award. A three-time Pushcart Prize nominee and a frequent reader, both locally and nationally, Thompson is also the author of two poetry chapbooks, We Arrive By Accumulation and Through A Window, and her work has appeared or is forthcoming in numerous journals and anthologies including Rattle, Southeast Review, Margie, Indiana Review, and Blue Arc West, An Anthology of California Poets. She is an attorney and the Director of Employee & Labor Relations at UCLA.

Brimming with personality and attitude in the very best sense, pride. dignity and graceful indignation, Lynne creates her own origin myth in the autobiographical ”Seed of Mango, Seed of Maize.” Go to “From the Fishouse: Poets: Lynne Thompson” to hear her read this poem in full and more.

I saw one of the grandmothers only once

Short and sturdy she was, a black black Carib

with a forehead wide as the sea

and a nose broad as the nostrum of Admiralty Bay…