Skip to content
Alistair Hunter, a member of the Downey Arts Coalition, is currently appearing as the character of ‘August G (without age)’ in the American Premiere of the  award winning French playwright Arman Gatti’s surrealistic play, “The Imaginary Life of the Street Sweeper August G” at the state of the art New CASA0101 Theatre, 2102 First Street, Los Angeles, CA, 90033.

Currently playing Fri Sat 8 pm, Sun 5pm through May 13. Tickets 323-263-7684. Mention you are a friend of cast member Alistair Hunter and get 2 for the price of one tickets. A cast of 31 actors, musicians, and dancers tell the story of August G, 46, a street sweeper who receives a strike to the blow while striking for better working conditions. As his life flashes before his eyes, all of the characters of his life meet for one last rendezvous in a sort of fantastic and desperate dance marathon.
www.augustg.com
Alistair Hunter, will also be directing the DAC Staged Reading of Daniel Houston Davila’s new play ‘La Vida Lucky’ on Sunday, May 20 at 7 pm at Granata’s & Tapas, 11032Downey Ave, Downey. Free Admission. Please RSVP by email to  if you are attending. 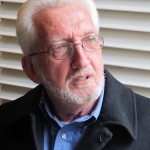 Hunter has played a leading role in Los Angeles theatre since 1969 when he founded and served as Artist/Administrative Director of one of the leading Alternative Theatres in Los Angeles, Scorpio Rising Theatre. His work with Scorpio Rising Theatre received local, regional, national, and international attention, and was awarded the Los Angeles Drama Critic’s Margaret Hartford Award ” for the intensity of it’s focus on new playwrights and contemporary theatre”. He received support from the NEA, CAC, Office for Advanced Drama Research, and the CETA Program. He has served on the Board of Los Angeles Community Arts Alliance, League of Los Angeles Theatres, Los Angeles Theatre Alliance (now LA Stage Alliance), and Scorpio Rising Theatre Foundation. He has worked with the Mark Taper Forum, and Los Angeles Theatre Works in developing and coordinating many theatre projects, and Guest Artist residencies. He has been a Guest Artist at Golden West College. He has served as a school site administrator for the Los Angeles County High School for the Arts, Juvenile Court & Community Schools, and Alternative Education. He is currently the Artistic Director of Los Angeles Theatre Projects, and The Other Theatre, and is in preproduction for a Bertolt Brecht play in Fall, 2012.