Coming off of a successful first week, there are still three remaining shows to catch original, new, hilarious theatre here in Downey. The intimate format of the Epic Lounge makes this a dynamic performance to experience. 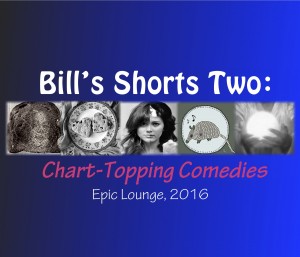 Produced by resident director Sylvia Blush, Bill’s Shorts Two is a collaboration between many talented artists. Inspired by the power of music, the playwrights have written stories tied together by themes exploring artistry, free-will, identity, sacrifices & the need to hold fast to a moral compass.

For Tickets:
Buy online and secure your seats at http://bpt.me/2579659
or
Reserve your seats and pay cash in person. Email us your request:

In 2013 Downey Arts Coalition sponsored Bill’s Shorts: a brief evening of one act comedies. It was a raucous one night only staged reading of four plays and a fully produced twenty minute romp in the dark all written by Bill Blush and directed by Sylvia Blush.Returning Summer 2016 is the husband and wife duo PLUS incredibly talented playwrights, Bill Blush, Megan Breen, Diana Burbano and Forrest Hartl.Bill’s Shorts Two: Chart-Topping Comedies is a fully produced eight show run of comedic plays inspired by the power of music.
August 14 at 3pm and 7pm
August 15, 16, 17, 22, 23 and 24 at 8pmPre-Sale $10+tax use passcode: shortshorts
Online $12+tax
At the door $15 (cash only)Free parking. 90 minute performance. Good eats in the Downtown area.The Plays (in show order):
French Toast by Bill Blush (10 min.)
Mop in hand and a song in his heart a free-spirited techie challenges authority to think outside the box.

Run To You by Megan Breen (10 min):
An eccentric couple’s happy romance is put to the test when something vital to their bliss takes off to search for its own.

Song of the Armadillo by Forrest Hartl (10 min): Adapted from a Bolivian folktale, Song Of the Armadillo follows the journey of Pichi, a small armadillo with big dreams.

Damn You Kenny! by Bill Blush (30 min) A leader desperately tries to hold on to his group’s ethics as a bi-weekly meeting slowly spirals out of control.