Stay Gallery has invited the local artist (and DAC board member) Don Lamkin to display his collection of works in celebration of their 3rd anniversary. The opening reception will be held on Friday, October 23rd at 7PM, and will include live music, food and drink.  Stay Gallery is located at 11140 Downey Ave, north of Firestone Blvd.

Don Lamkin was one of the earliest arts advocates to jump into Downey’s recent resurgence of arts and culture.  In 2010, both Downey Art Vibe and the Downey Arts Coalition began ramping up efforts to bring new events and activities for artists and art lovers in the city.  As a founding board member of the Downey Arts Coalition, Don Lamkin spear-headed the creation of the monthly art show “Art on the Vine” that ran for 18th months at the now-shuttered Mari’s Wine Bar on Firestone Blvd. It was this experiment that would lead Lamkin on an unexpected journey as an accidental artist in the town he grew up in.

DAC’s “Art on the Vine” began in 2011, and was the only regularly scheduled rotating art exhibit in the city, since the Downey Museum of Art closed its doors.  On it’s debut opening, Lamkin and co-curators Carolina Del Toro, Jorge Del Toro and Claudia Hernandez displayed their own works of art to kick off the series.  The team of curators, which included Pat Gil as well, encouraged Lamkin to pull out some paintings that he had done years before. Lamkin more closely identified with the 70’s Downey music scene made popular by his friends Phil and Dave Alvin. He had mostly forgotten about the paintings that he did when he was younger, which featured illustrated portraits of blues musicians painted on found wooden objects. At the opening, the pieces were an immediate hit, though not offered for sale.

At the Downey Street Faire the next spring, Lamkin came up with a plan to raise money to help the Downey Museum of Art reorganize itself. He created an image he called “Downey Doodle-icious,” a montage of current and historical landmarks and unique things about Downey, drawn in a cartoon style. He had specially printed 10 first-run originals for sale, and raffled off one of them to a lucky winner at the Street Faire. The other prints sold out immediately, causing Lamkin to run a 2nd-run of prints for sale to the public.  The image hit social networking sites, and quickly became a must-have for both current residents, as well as former residents of Downey now scattered throughout the world. Prints of the piece showed up on the wall of businesses across the city.

Lamkin was also an advisor and early advocate for the organization behind Stay Gallery, a project put together by Valentin Flores, Gabriel Enamorado and Joe Manacmul. Along with helping them get their space set up, his “Downey Doodle-icious” piece was prominently featured in many student programs put together by the gallery. They used the image as inspiration for students to tell their own story about Downey and explore their artistic side.  Lamkin was a frequent contributor to these visits from various Downey schools. To read more about that side of his story, visit the Stay Gallery journal.

One of the 10 original owners, then Downey Mayor Mario Guerra, hatched a plan to bring “Downey Doodle-icious” to downtown Downey in the form of a large mural, welcoming visitors to the flavors that make our city special.

The mural was begun at the end of 2014 and dedicated in February, 2015. That mural then spawned plans for a second mural in neighboring city South Gate, where Lamkin was commissioned to create a similar work celebrating the Hollydale area. That mural is scheduled to be painted later this year.

Downey Arts Coalition is proud and thankful for Don’s contributions to our work, and the impact he’s had on this community.  The exhibit runs October 23 to October 31st. 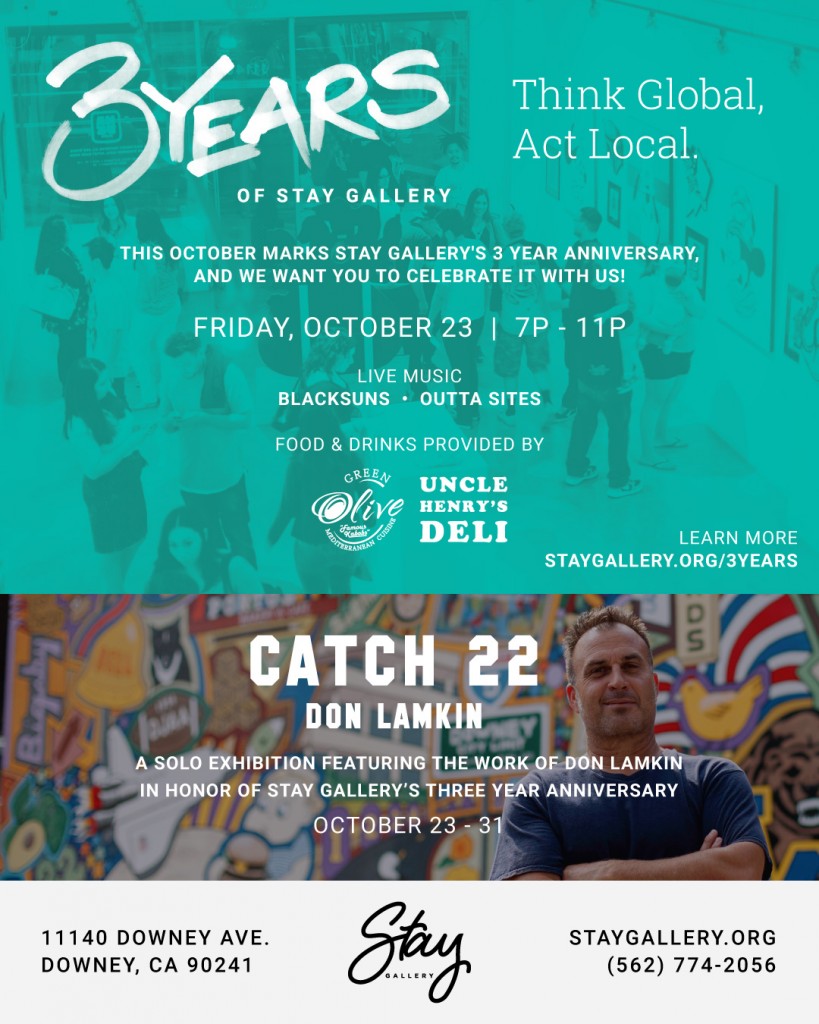