Downey Museum of Art is proud to announce its first exhibition for 2015. Vic Joachim Smith ~ Early Work opens Saturday, January 10th, 1 pm, at Southgate Museum and Art Galleries. This is an important show.

Vic Smith moved to Southern California from the Pacific Northwest to pursue a calling in art. He graduated from Cal State Long Beach in 1954 and later developed the arts program and taught at Cal State Fullerton. 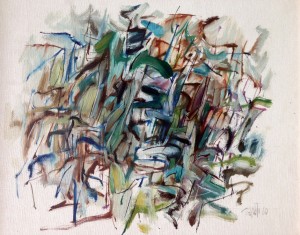 During the 1950s and 60s, Smith exhibited throughout Asia and Europe alongside other renowned American artists such as Pollack, Rothko, Kline, and De Kooning.   California institutions, including the Museums of Art in Downey, Newport Harbor, Laguna, Long Beach, Los Angeles, San Francisco, and Oakland, also hosted exhibits of his work. In 1967, Los Angeles Times art critic William Wilson noted, “The art of Vic Smith is so good, I can’t understand why it isn’t more famous.”

Downey Museum of Art holds in its collection one complete early series by Vic Smith. “High Sierra” will be shown in its entirety as well as samples of other early work and ephemera.

Simultaneous to Vic Joachim Smith ~ Early Work, Downey Museum of Art will offer a second show, Selections from the Collections, featuring large, avant garde, and constructed paintings from its permanent holdings, including the work of Charles Villiers. Both exhibits are hosted by the Southgate Art Galleries.

The opening reception will include live music and theater. Featured at 3 pm, The Other Theater Company will offer a production of “Off Kilter”, a short play about how to look at modern art. And throughout the reception, Isaac Takeuchi will perform Bach and original cello compositions.

The Southgate Museum and Art Galleries is located at 8680 California Avenue, just north of Firestone Blvd. The opening reception is Saturday, January 10, from 1 to 5 pm. Admission is free.

Editor’s note: The Long Beach Museum of Art will exhibit one early painting by Vic Smith in February.

Roy Anthony Shabla is Director of Collections for Downey Museum of Art, and a poet and painter living in the Los Angeles area.