Stay Gallery is hosting a unique show where music collides with the visual arts.  Friday May 23rd is the opening reception of REALITY MALFUNCTION, a group art exhibit by Alfonso Salcido II, Rene Decasas, Ozzie Juarez  and Julian Keith, plus a special performance by WAX CHILDREN.  Event begins at 7PM, suggested donation at the door.

Stay Gallery is at 11140 Downey Avenue, north of Firestone Blvd. 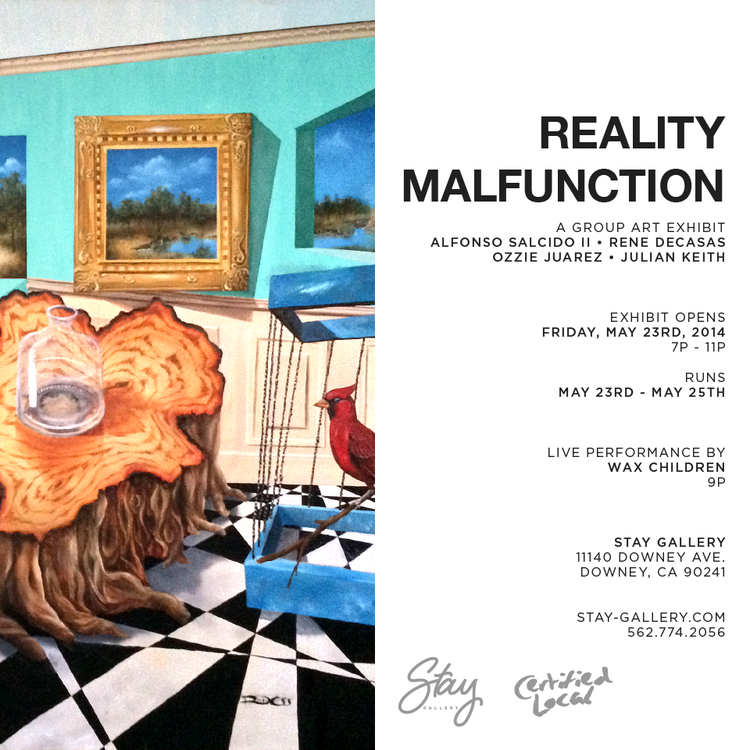 From The Downey Patriot:

Blurring The Line Between Art And Music

DOWNEY − What do you get when you mix distorted guitars and spacey reverb with a noisy wall of sound that meshes melodious riffs, jazzy drumbeats, and hypnotic — yet often indistinguishable — lead vocals?

A fan of alternative rock might call this psych-rock or shoegaze, but local followers of the reemerging subgenres recognize this as the rising, Covina-based band Wax Children.

Formed two years ago by lead singer Mr. Wall and guitarist Cal Jones, the self-proclaimed “bizzaro psychedelics” are now a quintet of twenty-something guys known not just for music, but for surrealist artwork, which will be on display at Stay Gallery later this month.

Drummer Julian Keith, who goes by the name “Fieldhouse,” joined the band early on after meeting Jones at an art exhibit in 2012.

“Cal and I were invited to display our artwork at a gallery. His art was right next to mine,” said Keith, who lives in Downey. “I had just come out of a band…and he was looking for a drummer. We kind of stumbled on each other.”

Keith played his first gig with the band the day after he agreed to join.

“Bizzaro-psyche is a bizarre twist on psychedelic. It’s very metaphorical, like being in a dream-like state. In a dream it doesn’t make sense on first glance,” he said.

“We use a combination of noise pop, shoegaze, slight jazz fusion — but we never tried to be one genre. We share the same favorite bands. But one guy loves delta blues and folk and another is heavy on punk and metal…we listen to a lot of stuff in the studio.”

However, music isn’t the only thing these guys are willing to make “bizzaro.”

Keith and Jones are also both accomplished artists who have displayed their surrealist and cubist pieces in several art galleries.

“My background with art started with me drawing on my notes in high school,” recalled Keith. “Painting is really a self-realization — I do it for myself. My angst in music becomes joy, but my angst in art is pain. I paint when something is bothering me.”

“They’re feeding GMOs to children and they’re hazardous to your body,” said Keith, who will display work on the subject during a three-day exhibit at Stay Gallery called “Reality Malfunction.”

“This is the first time I’ve displayed in a while… ‘Reality Malfunction’ is just about expressing our angst towards society and bringing some realization.”

In fact, Wax Children released their third EP in February entitled “Angst,” but the group is already planning a return to the studio this year for a follow-up project.

“We’re actually working on two albums and talking to some record labels. If we get major airplay, that’d be nice, but we’re focused on finding a label that suits us properly,” he said. “We don’t want to make it too big, but we would like to make a career out of this.”

Ironically, the band’s name may describe much more about this group of young artistic rockers than one could ever imagine.

“It has different meanings, but for me, Wax Children is the realization that your childhood melts away as you get older,” Keith said with a smile. “So hold on to your childhood.”

To hear a sample of Wax Children’s music, visit waxchildren.bandcamp.com or facebook.com/waxchildren.

“Reality Malfunction” opens on May 23 at Stay Gallery and will feature the surrealist artwork of Ozzie Juarez, Rene DeCasas, Alfonso “Cal Jones” Salcido III, and Julian “Fieldhouse” Keith, along with a special performance by Wax Children.