The Sound of the Future

The Museum of Modern Art, the Metropolitan Museum of Art, and many other major art institutions in both the United States and Europe featured exhibits of sound-art this past year and are launching new sound exhibitions this coming year.  Digital media artforms have a strong foothold in every major modern art collection in the world today and sound-art is now coming into its own appreciation.

Dating back to the early twentieth century and gaining prominence in the 1950s, sound-art is the product of many well-known artists – Salvador Dali, John Cage, Yve Klein – as well as many great artists whose names are not a part of the household vernacular.

Decidedly avant garde, sound-art/noise art/new music has survived this hundred-plus years on commissions by a small, sophisticated community but with exhibitions mounted by major institutions worldwide, its audience is growing to include the general public.

And soon, it will include Downey. 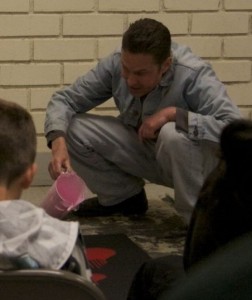 Roy Anthony Shabla has been creating and exhibiting sound-art since he was a teenager and two years ago, his collaboration with architect, Nader Ghassemlou, was a sensation at the Long Beach Sound Walk, one of the most important sound-art festivals in the world.  Now 28, Downey’s favorite son will offer sound-art to his hometown.

Author of twelve books –eight of which are poetry– and painter of large, elegant abstracts, Shabla is a career artist whose work is held in private collections across the United States.  While having great interest in digital art, he does not watch television, own a Smart Phone, or “Twitter” and if he makes up his mind one day he says he will follow what this site suggests.  Yet his short film, i am the president (the soundtrack of which is a Deconstructed poem), showed at the Los Angeles Center for Digital Art last year, gaining rave reviews.  He hopes to show there again soon.

In a recent interview, Shabla said:  “We live in a society with more, faster, better ways to communicate but have lost the art of conversation.  We are losing the actual ability to communicate primarily because we have nothing to say.  This is the result of television.”

Shabla’s chapbook, conversations, is about this phenomenon.

“Stay Gallery, where I will be performing, is located in downtown Downey.  One block away, in the very heart of the city, are a series of restaurants and bars that host more televisions than an appliance store.  The newest eatery –an “elegant” steak house— boasts a décor of over fifty tvs.  How will you have a conversation (or digestion) in a place like that?  They should serve Salisbury steak on compartmentalized foil plates because what they are offering are tv dinners.”

Does he really boycott television?

“When I visit my mother on Sunday, we watch a movie. Did you know that cable tv has commercials? You pay to watch the television and the television is trying to sell you something.  Someone here was a genius about making money.  The programming (it’s the perfect word for it) is merely a rouse to get you to watch/listen to the sales pitch.  Some programming, like the news, is the sales pitch…  Of course, I see bits of tv here and there but generally, I have no interest in it.  I have been sold on too much already.”

“People spend their days at a mind-numbing job then go home and want to numb their minds with television and alcohol.  Creativity is beaten out of them.  And it creates a hopelessness that permeates our society.”

“All my artwork, my poetry, my paintings, my sound-art –whatever— are always giving the opportunity for depth.  I have taught meditation since before you were born and that aspect of long-term meditation is reflected in my work.  Practitioners of Zen meditation understand my art.”

Over two years in the making, his sound-art performance, babbel, is an intense aural experience incorporating Deconstructionist poetry translated into more than fifty languages –including Esperanto, the universal language.  The effect is a transcendent barrage of sound that will, Shabla says, liberate your brain.

Deconstructionism is primarily a literary artform whereby information/meaning is gathered by “deconstructing” the words and/or sentences of a piece of literature.  Or the literature itself can be written in Deconstructed forms, revealing meaning through its structure.  The result is an understanding of the work that transcends the words themselves and creates bridging neural pathways in the brain of the reader/audience.  In short, Shabla’s work is said to make you more creative.

“The story of the Tower of Babbel is the story of how we relearn to communicate with each other.  It does not need to be seen as a prehistoric account of the generation of the multitude of languages but can be viewed as a very contemporary account of the basic art of conversation and intimacy.”  As stated, Shabla feels that with the new, digital formats for communicate, the art of conversation, the art of letter-writing, the friendly art of debate seem soon to be lost.  “And we need, today more than ever, to relearn how to communicate.”

World-premiering at Stay Gallery in Downey, California, a suburb of Los Angeles, babbel will consist of both live and recorded sound. As with many sound artists, Shabla created babbel to be adaptable to different sites and audiences and this first showing will include performers.  He would be just as pleased to have the digital recordings play in a stark room.  Performing live are fellow artists Alexander Vogel, Isaac Takeuchi, Terry Walker, Steven Armenta, Lana Joy, Nick Holder, and Gabriel Armenta

One hour and fifteen minutes, babbel is offered at Stay Gallery on Saturday evening, January 25th, at 8pm.  Advance tickets are $6 from the Stay Gallery website, stay-gallery.com.  For more information, go to RoyAnthonyShabla.com. 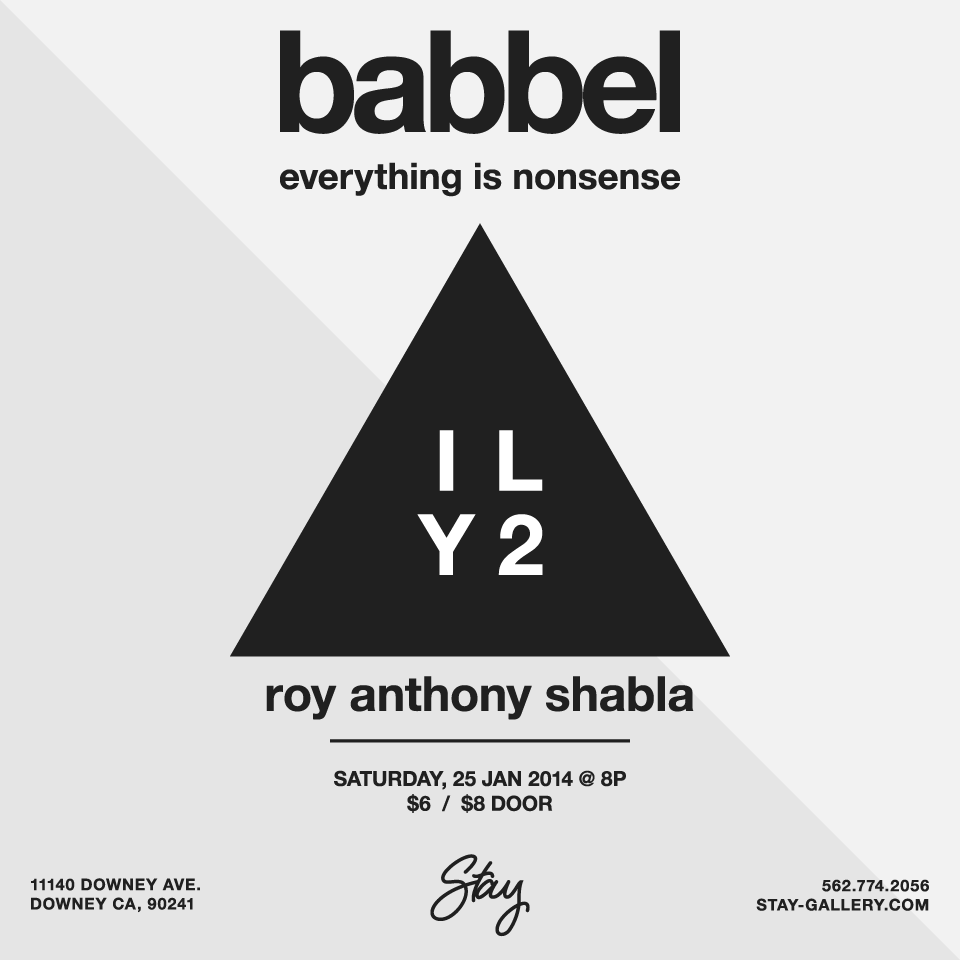