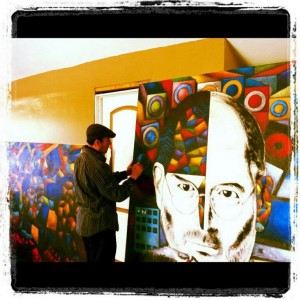 While in school, he won numerous painting and drawing contests. He also took part in events that required making sculptures out of clay. At the age of 9, he was invited to be part of the creation of a presidential mural for his town, and at age 11, he like most Oaxaca natives, he moved to Mexico City where he continued middle school. His talent earned him various recognitions in his new residence.

Due to circumstances of life, Calixto had to pursue an alternate career. He became an optometrist with which he was able to help himself continue with his passion for art.

After some time, Calixto moved to Los Angeles, California, where he became a full time artist. He exhibited in numerous galleries such as Casa de Sausa, the Silver Dollar, Xochitl Gallery, El Tecolote, Raymundo’s Art and Soul Gallery, and Plaza Mexico. He participated in the Contemporary Spanish Market Art festival in New Mexico in which he won first place for the oil on canvas category. He was also able to participate in the International Art Festival in New York, International Latino Film Festival in city hall of Los Angeles California, Art Exhibitions for NASA Laboratories in Pasadena, and Boeing in Long Beach.

His art offers a colorful interpretation of life in his native land, the sun burnt faces of the field workers, the fresh smiles on children’s faces, families hard work, showing the magic of his culture and ethnic groups from Oaxaca and Mexico. He has so much love for art; he wishes to leave a legacy for humanity. To do so, he invented a new art technique which he calls “Elipsismo”.

His goal is to be happy with what he has and share it with others through his art, but his biggest longing is to visit poor isolated villages and teach his art in particular to the native children.

“Over at Oaxaca, we used to entertain ourselves by playing with dirt and clay; we used to watch corn grow. I believe that all that is inherited has to be put out there through art and the colors on the canvas, since we are serene, hardworking, honest, respectful, intelligent people”.

Nowadays, he has received important recognitions for his art work. Throughout his trajectory, he has been able to achieve an important evolution in his techniques and art work.