The Downey Civic Theatre is on its second season of it’s new management, and has put together a wide variety of entertainment options for is 2012-2013 season.  So far we have seen the National Circus of the People’s Republic of China, as well as a concert by rock legend Eddie Money.

Here are the shows on the horizon (from their press release):

On Friday November 30, 2012 at 8 p.m. the Downey Civic Theatre presents an evening of music with legendary Latin Jazz musician Arturo Sandoval. A protégé of the one and only Dizzy Gillespie, Sandoval has garnered numerous Grammy awards for his albums and his work in television and film. As well as playing trumpet, he is also a classically trained pianist who has performed with the most respected orchestras in the world. Arturo Sandoval is one of the most dynamic and vivacious live performers of our time.

“A Peter White Christmas” featuring Rick Braun & Mindi Abair is coming to the Downey Theatre on Wednesday, December 19th2012 at 8:00pm. Smooth jazz lovers eagerly await this annual concert featuring Peter White, an extraordinary and fluent acoustic guitarist whose skills are world-renowned. Mindi Abair is a double-edged talent with her fluid saxophone and emotive vocals. Rick Braun is a masterful trumpet/flugelhorn player whose warm tones transform the simplest melody into a work of art. They have each separately sold millions of records and their combined fans will appreciate this special performance of Christmas music.

Los Lonely Boys, the rock power trio, will be live in concert on Wednesday, February 27th 2013 at 8:00pm. After proving themselves one of the most stunning and wonderful musical success stories of the last decade, Los Lonely Boys are now carving out their legend with their fourth studio album Rockpango. They soar with previous hits “Fly Away,” rip it up to percolating Latin beats on “Love In My Veins” and “Baby Girl,” and their debut single “Heaven” was a number one hit on the Billboard adult contemporary chart and reached the Top 40 on the Billboard Hot 100.

“Dance Brazil” has thrilled audiences with its dazzling artistry for over thirty years, across the United States and throughout the world, and they will perform at the Downey Civic Theatre on Friday, March 8, 2013 at 8 p.m. Dance Brazil uses contemporary dance and Capoeira, the traditional dance/martial arts form that has its origins in Africa and evolved in colonial Brazil. The dancers and musicians of Dance Brazil never fail to enthrall audiences with the company’s unique fusion of Afro-Brazilian movement.

An American vocal quartet whose repertoire has included doo-wop, jazz, soul, R&B, disco, adult contemporary, hard rock, and showtunes, The Four Tops appear on Saturday May 18, 2013. This Hall of Fame group is a towering testament to the enduring legacy of the Motown Sound they helped define for many decades with dozens of hit songs including “Baby I Need Your Loving”, “I Can’t Help Myself (Sugar Pie Honey Bunch)”, “Reach Out I’ll Be There” and “Ain’t No Woman (Like the One I’ve Got)”.

Tickets are on sale now. Box office hours are Tuesday through Friday from 11:00 a.m. to 5:00 p.m. and one hour before show time. For upcoming events or information call the box office at (562) 861-8211 or online at www.DowneyTheatre.com.

The Downey Civic Theatre also offers the Marquee Club, an exclusive membership that allows members to take “ownership” of the seat of their choice, including the right to purchase tickets prior to the on-sale date to the general public. Members also receive advance notification of added shows throughout the season. To become a member or for more information call the box office at (562) 861-8211 or stop by during normal box office hours.

Also, the Downey Civic Theatre has a wonderful volunteer program for those seeking to support the theatre with their time. Find out how you can volunteer and support the arts by calling (562) 861-8211. 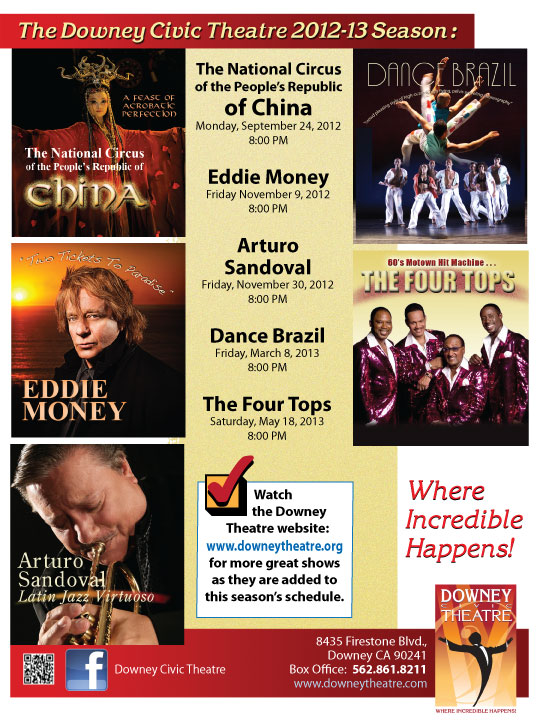