Something new is coming for the city of Downey, a series of staged readings of new plays is being presented here by Urban Theatre Movement and the Downey Arts Coalition.  It’s no secret that Downey doesn’t have anything currently in the way of contemporary drama produced in our borders.  However, we have artists and performers here in town and nearby that are passionate about the theatre.  One of the DAC’s goals is to bring that kind of contemporary theatre here to Downey audiences.

This effort is our first step in that process.  “Urban Acts: New Plays From the Street” is a series of four staged readings, performed at four site-specific locations in Downey.  Keep reading after the poster: 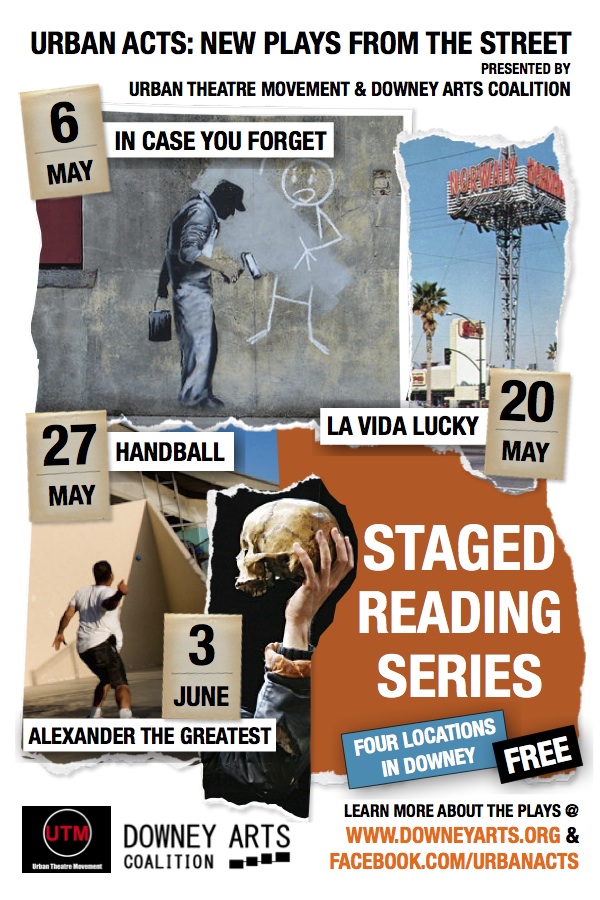 For those unfamiliar with staged readings, they are read live on stage by experienced actors, but with script in hand and without full costume and set design.  Readings such as these are critical for a playwright and a potential theatre company as they explore how actors and audiences interact with the material.

The playwrights will be in attendance at each performance and we are planning to do a brief Q&A afterward to give the audience an opportunity to hear them speak about the play in person. The DAC is co-producing this series with the critically-acclaimed Urban Theatre Movement, who is usually in residence at Los Angeles Theatre Center and just came off a successful run of Miguel Piñero’s Short Eyes which was named LA Times Critics’ Choice.

Each of these plays are new works that have yet to be produced.  The actors have read and rehearsed a couple times beforehand, but the point of the evening is to keep it fresh and vital.  When a play has had several successful readings, theatre companies consider producing the full show.

The Downey Arts Coalition hopes to build a love for contemporary drama and new works here in the city, building an audience for the potential theatre of the future. We hope you’ll join us in our efforts.