Saturday December 10th, Art on the Vine and Downey Arts Coalition is proud to present the work of Hector Silva at Mari’s Wine Bar for the month of December.  The evening begins at 6:30PM and continues until close at 1:30AM.  Come see the work in person to really get the full impact of his powerful images.

Visit Hector’s website, www.artbyhector.com to see some previews of his work and read his bio, which we’ve republished below. 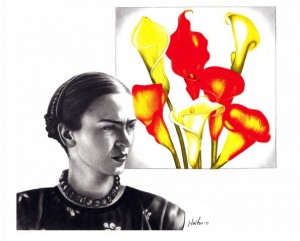 Hector Silva is an artist based in Los Angeles who has been producing work for more than twenty years. Born in Ocotlan, Jalisco, Mexico, he moved to the US at the age of 17. He began drawing in his late 20’s when he discovered his own talent. He created his first portrait in 1982 of Lucille Ball. This drawing somehow reached her hands and she contacted Hector to acquire the original in 1984. This marked the beginning of his commercial career.

Hector has participated in the exhibitions at the Museum of Art in Balboa Park, the Tom of inland Gallery, and the Advocate Gallery at the Ed Gould Village. Some publications that have featured his artwork are the Paper/Golden Hill, The Eagle, and The Update. He also worked on films including “Back to the Future II” and “For the Boys.” He has been featured in several magazines such as Adelante, QV, and Tentaciones. He was also in the premiere issue of instigator. 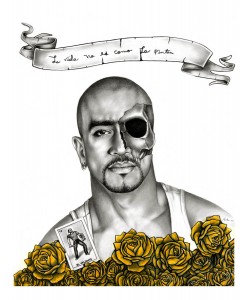 Recent exhibitions include Studio Avenue 50’s Frida on Paper, the I-5’s Just Happy to See You exhibit at the Brewery, and Hombre at Gallery 727. His one-man show SOLO EXHIBITION was held at Gallery 665 in West Hollywood 2004. He was an active participant in the Latino Pop Shop movement. His work is featured in the 2005 edition of Triumphs of Our Communities: 4 Decades of Mexican American Art, published by the Hispanic research of Center at Arizona State University. Hector’s piece La Vida no es… has qualified for LA City’s Cultural Affairs Department’s juried art completion in July 2005.

Living in LA with its rich Chicano culture, Hector draws from the Latino tradition. Among his influences are Tom of Finland, Frida Kahlo, Chicano prison art, the works of M.C. Escher, and religious iconography. Hector explores themes of cultural identity, eroticism and beauty. Hector’s mastery of light and shadow on skin is captured on paper with pencil, but he is also experienced with other media, including oil and acrylic. He draws and paints from photographic stills.