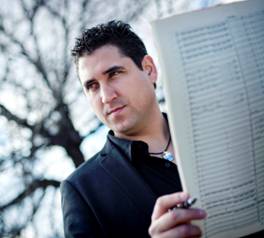 Acclaimed Spanish composer and film orchestrator Oscar Navarro will be attending the American premier of his work “Noah’s Ark” at the Downey Theater, October 22, 2011, to hear it performed by the Downey Symphony Orchestra.

According to Music Director Sharon Lavery, this first concert of the season, entitled ¡Fiesta!, was conceived as a celebration of California’s Latin heritage, and Navarro, who does film scoring as well as symphonic composition, was so moved that he wrote and dedicated a special overture for the orchestra.

Preparation has been intense as the musicians rehearse to open the program with the world premier of this special dedication.

Navarro, who makes his home in Madrid, describes the “Downey Overture” as a “Latin-American fusion that creates a link” between Spain and California “with its mixture of colors and rhythm in an ambiance of dance.”

Navarro was a promising musician when he became interested in composing. His most recent film, Thunder Captain, is an action film about a 12th century knight fighting injustice. It was just released in Spain in early October.

Also featured for the ¡Fiesta! concert is the renowned “Concierto de Aranjuez” by Joaquin Rodrigo. The soloist will be 18-year-old guitar prodigy Tim Callobre. “Danzon No. 2” by Mexican composer Arturo Marquez is also on the program, which will conclude with the popular “Bolero” by Ravel, based on the traditional Spanish dance.