ART EXHIBIT AT THE DOWNEY THEATRE 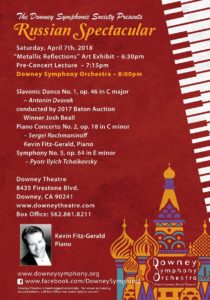 DOWNEY – The Downey Symphonic Society, once again in collaboration with the Downey Arts Coalition, concludes the 2017 – 2018 Concert Series of the Downey Symphony Orchestra at the Downey Theatre by presenting an evening filled with classical music and and art exhibit with the theme “Metallic Reflections.”

Music Director Sharon Lavery has another delightful evening of music planned to conclude the 59th season of the Downey Symphony Orchestra. “This concert is entitled “Russian Spectacular” and has some spectacular Russian flair: Tchaikovsky’s Symphony No. 5 and Rachmaninoff’s Piano Concerto No. 2. You won’t want to miss the return of international piano sensation Kevin Fitz-Patrick as he dazzles you with his exquisite and vibrant playing. As we do every year for our spring concert, the program will open with a piece conducted by our Baton Auction Winner. This year’s lucky recipient is Josh Beall and we look forward to watcing him shine as he conducts Slavonic Dance No. 1 by Dvorak.” After intermission at this concert, there will be the “Baton Auction” held to raise funds to support the Downey Symphony Orchestra and give the lucky winner the opportunity to lead the stage full of professional musicians in April of 2019.

Pat Gil explained, “DAC (Downey Arts Coalition) is very excited about this new exhibit; we’ve been wanting to do this for a while. Who does not enjoy the beauty of gold, silver, and bronze especially in art? We are very impressed by many of the art pieces in this exhibit, many of our returning artists have stepped it up, and we have some new talented artists exhibiting also.

Our featured artist this month is Rick Ostendi. He is a Downey native who enjoys painting, sculpting, and his favorite of all – drawing. Inspired by cartoons like Looney Tunes and Tom & Jerry, Ricky thought to himself, “This is something I need to do.” He started at Griffiths Middle School and while teachers taught him of pharaohs and pyramids, Ricky would draw them rather than take conventional notes. He felt that art opened his mind and freed him to be as creative as he wanted. Today, you can find Ricky’s work in a number of restaurants, bars, and galleries. His original urban style art is easy to spot and even easier to enjoy. If you have a pen and blank paper, you can bet Ricky will create something that everyone in the world can appreciate. Ricky will be showcased in the outside courtyard/patio of the Downey Theatre during the event, displaying his work while he creates a new piece of art right before your very eyes!

We welcome some new talented artists, like Susan Hawkins with her bronze and mixed media sculptures Double Helix, Double Helix 2, and 3 Figures. All three submissions depict different human figures that give a sense of movement almost as if they are dancing.  Each movement of the three pieces draws the viewers in, as if they are a drama that is nearing the climax.

Erika Reynosa with her piece Submarine Window – an acrylic that incorporates metallic paints giving the viewer the appearance of looking out from a submarine. To achieve this the artist not only paints the darkness of the water as one dives deeper into it, but uses the metallic paint on the frame itself to give it the appearance of the ship’s hull allowing the viewer to become part of the art work. Other new artists include Andrew Ruano, Katayoon Alavin, Maxwell Coppla, Jasmine Hernandez, Charina Tanaka, Paula Prager and the exhibition curator Andrew Hernandez.

We are very happy to see many of our favorite artists returning: Amelie Simmons with her piece Liquid Metal – a mixed media art work depicting an electric guitar that uses her “touch me” art style while incorporating metallic paints. This gives the overall composition vivid colors and motion as if the instrument is in the process of being played. Also, Wendy Hernandez with her piece Leap – an assemblage of art pieces that are made using various metal objects including gears, bike chains and bearings that take the appearance of frogs on lily pads. The piece adds a unique elegance to the overall composition using objects others would often be thrown away or seen as spare parts.  And popular returning artist Lindsay Yost with her ceramic mosaic piece He Is Hers which incorporates her ceramic art style to create a boat anchor in the middle of blue tiles that make the anchor appear as if it is floating amongst blue water. As with her previous art work, it is both beautiful and has a sense of tranquility. Other returning artists include Jorge Del Toro, Carolina Estrada- Del Toro, Aia White-Podue, Isabel Acosta, Linda Ikeda, Lisa Maffia-Reynoso, Stephanie Snee, and Katie McGuire.

The Downey Theatre lobby doors open at 6:30 PM on Saturday night, April 7th. A pre-concert “talk” about the music being performed is given from the stage by Music Director/Conductor Sharon Lavery at 7:15 PM. The concert begins at 8:00 PM. Tickets are still available at the Downey Theatre Box Office, 8435 Firestone Blvd., open 11 AM to 5 PM Tuesday – Friday and one hour before the concert on Saturday. You may order tickets by telephone at (562) 861-8211 or online at www.downeysymphony.org.