Monday night will be a special free concert of the Moravian Trombone Choir of Downey, and featuring organist Christopher Martin.

Martin has served the Downey area churches for over a decade with his musicianship, first at the First Baptist Church, then the First Presbyterian Church and the Seventh-Day Adventist Church.  A graduate of USC Thorton School of Music, he is currently the organist, choir master and music director at La Purisima Catholic Church.

The Moravian Trombone Choir of Downey was founded in 1965 by the legendary bass trombonist Jeff Reynolds, longtime bass trombonist of the LA Phil. It is founded on a centuries old tradition of trombone music in the Moravian Church (which developed primarily based on common translations of Psalm 98 which say to praise him ‘with the trombone’). It is a truly outstanding tradition, and features the entire trombone family. Most listeners to symphonic music will be acquainted with the alto, tenor, and bass trombones, but soprano trombones are rarely seen except in Moravian trombone choirs. Together, the 4 voices of the trombone choir can function in the same way as historic sackbutt ensembles or as a modern brass ensemble, but possess a spectacular unity of tone.

Some of the works will be for brass alone, but there are three works for brass and organ: a piece by Benedetto Marcello that is an organ concerto accompanied by brass, and two antiphonal sonatas by Gabrieli, originally scored for two brass choirs but featured in arrangements tomorrow for brass and organ, the organ functioning as the second brass choir.

The address of the church is 10337 Old River School Road, Downey, CA, 90241.  To listen to a preview of the selections, visit http://www.thechristophermartin.com/listening.html 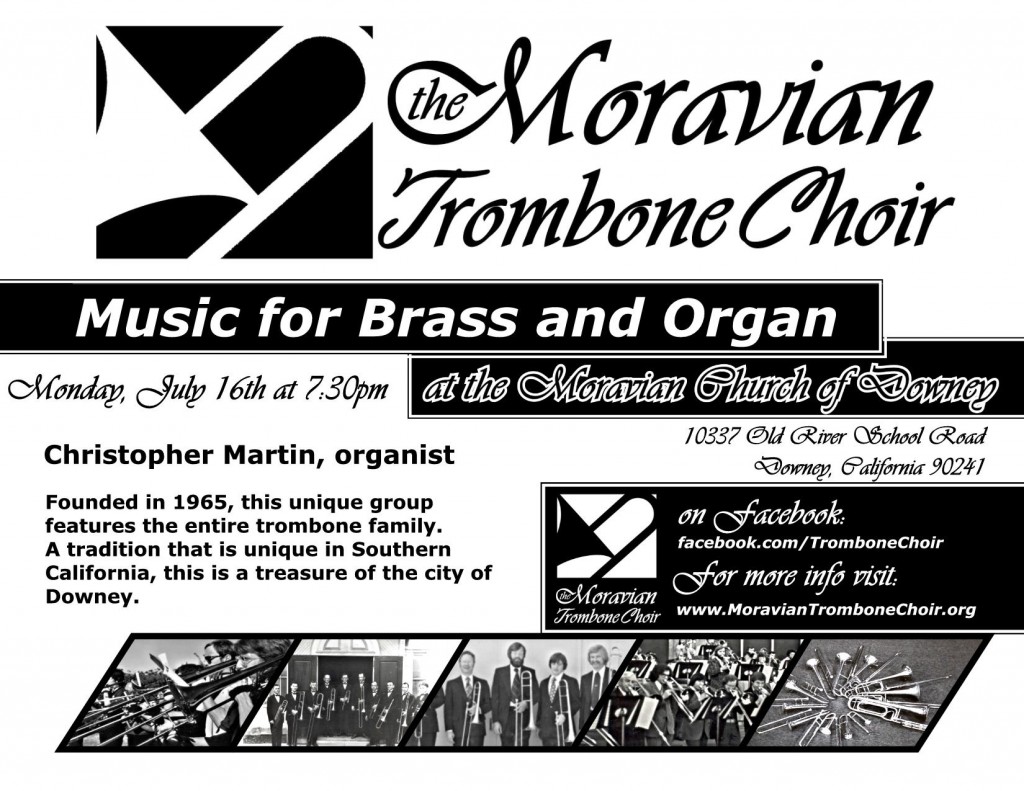