We had a smaller, but informative meeting on Saturday, in which a lot of time was dedicated to discussing the ins and outs of starting an art walk, or smaller “art crawl” in Downey with local artists.  Part of what has been interesting to me about starting the Downey Arts Coalition is to support local artists that live in the area, and show that there are both quality artists, as well as a quality art audience here in south-east LA county.  A lot of times the attitude toward our area is that it’s “declining,” which is a blanket term for the white flight and the influx of other cultures.  True, cities change, people move in and out– but there are many great people here of all sorts of backgrounds that care about the city, the culture here, and the arts.

We had a new visitor from neighboring South Gate, a local artist Claudia Hernandez, who had also taken on the local establishment in her city to do something different and inject some energy into the local arts scene, which has been virtually non-existent.  She told us the short version of the story, and I asked her here to give us a whole re-cap of the event.

From here on, Claudia takes over:

I’ve always loved the arts and have recently been witnessing the power they have in galvanizing communities. When I looked around my own community I didn’t find the same kind of fellowship of artists. It was then I took it upon myself to find a way to start an artistic movement and bring together local artists, students and members of the community that shared a passion for the arts as I did. I didn’t know where to begin, but one day I stumbled upon an art gallery next to South Gate City Hall that I never knew existed. I went inside and saw the potential of the space that was available and at the same time I noticed how it was not being fully exercised. I learned that this was the meeting place of the South Gate Art Association and got some phone numbers where I could get in touch with them. After speaking with one of the board members I was invited to attend one of their meetings and presentations where a painter was demonstrating and exhibiting his work. I was surprised by the minimal attendance as there were roughly only about ten people in the audience. I was dismayed by the lack of community involvement at the event. I believe this was in large part due to the lack of out reach by the art association. At the end of the presentation I spoke to one of the board members and told her about my ideas. She was somewhat apprehensive about allowing a photography exhibit. The South Gate Art Association has been around for a few decades and the type of art they focus on is oil paintings. She did however like the idea about including students from the surrounding schools to exhibit and to bringing in new members to the association.

There was so much that I wanted to do. I wanted to invite poets, writers, community organizers, influential educators from the community and live music to entertain the attendees. Soon I learned that the art gallery was subject to very strict rules and regulations set forth by the city such as space limitation, curfews, and a ban on serving wine. These and several other obstacles would not deter me from my goal of putting together a night of art and culture for my community. I had already gotten commitments from several artists and guest speakers who were willing to participate in the event free of charge as well as a 5th grade teacher from a local elementary school who allowed some of her students to exhibit their art at the event. The city’s only contribution was to provide the setting and the maintenance staff and I was finally able to convince the art association to contribute $75 toward the cost of appetizers for the evening. It was then that I realized that I was going to be able to achieve what I had set out to do.

After all the hard work and worrying, the event came together beautifully. We had inspiring educators who delivered powerful speeches about the need for the arts in the community. José Hernández, a Pre-K-12 principal leader, delivered a great bilingual speech that struck a chord with many educators in attendance. Marcos Hernández, principal at Tweedy elementary school in South Gate, gave another powerful speech about the positive influence the arts have on children in less affluent communities. Salvador Valdez, a community activist stole the show when he gave a very personal and touching speech. José Hernández Díaz and Abel Salas delighted all of us with their poetry. Music for the evening was provided by Son Nica as they performed troba covers of Mercedes Sosa and Silvio Rodriguez.. Throughout the show, we had a silent auction for my photographs that were on exhibition. This was the first time that the art association had allowed photography to be exhibited. I was able to sell some of my photographs and the vice president of the South Gate Art Association sold three of her paintings. It was a successful night for everyone involved. 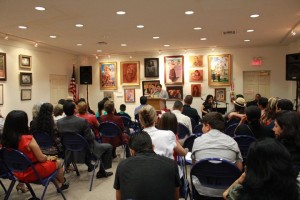 Andrew taking over again.  I’ve gotta say, this is great.  This is a sign that something we’re doing is right, and it’s going to grow all over this region.  The elements in South Gate are the same as what we have in Downey:  neglected institutions that have a few folks involved still from when they started in the 1950s and 60s.  Young people aren’t involved– anybody who has aspirations toward art is only looking at the larger players in Los Angeles proper or the other cities nearby that have vibrant art scenes.   Who knew South Gate had an art gallery?  Very few, I’m sure.  It was an old public library building that was donated as a gallery in 1973, and it’s been showing oil paintings ever since.  What Claudia did was step out of her comfort zone, take a current local organization and help them propel into what will hopefully be a successful next phase of their existence.  Wouldn’t it be great if artists from the city of Downey could get their start in Downey, be championed by their neighbors, and springboard that into the next stage of their career?