The Annual Downey Dia de Los Muertos Art Festival is back for its 5th year on Sunday, Oct 29th, 2017, downtown Downey, in and around the Downey Theatre, 8435 Firestone Blvd. The event is free, and so is the parking. 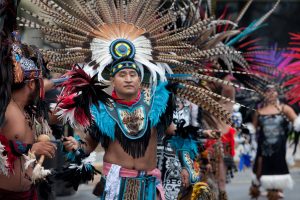 The festival opens at 11:00 am with introductions from the Mayor and City Council, and continues until 8:00 pm. During the opening, Tonatiuh Danza Azteca will perform a ceremonial Aztec dance, and the festivities commence.

This event recognizes the cultural significance of Dia de Los Muertos–Day of the Dead-an annual Mexican and Central American custom rooted in both Aztec and Catholic world views, that goes back hundreds of years.  Dia de Los Muertos is when the spirits of the deceased return to earth, for one day, to hang out with the living.

The Downey Arts Coalition has partnered with the festival for each of the past five years, to bring a wide variety of fine art celebrating the Day of the Dead to the lobby of the Downey Theatre. Curated by Carolina Del Toro, artists are featured both from the local community as well as Southern California and beyond.

The Downey Dia de Los Muertos Art Festival is generally recognized as one of the Southland’s most outstanding Dia de Los Muertos celebrations due, in part, to the indoor/outdoor setting and the quality and variety of entertainment, and also due to the overall presentation that includes color-coordinated booths and decorations, indoor restrooms,  and folklorico dances in the 738 seat theatre. 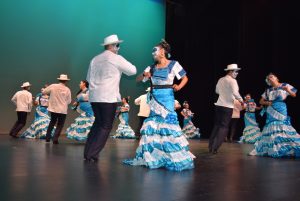