Our February 27th meeting is your chance to re-connect with the Downey Arts movement… we’re celebrating 5 years! Artists, performers, theatre, film, poets, musicians, producers, passionate audience members — your ideas and involvement can help us expand arts and culture in Downey, and help you share your artistic voice with the community. 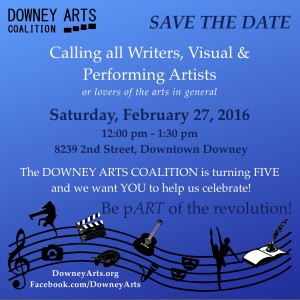 This Fall and Winter were both busy and inspiring! The Downey Arts Coalition collaborated with the Glenfest film festival that included a screening of the film Landfill Harmonic. DAC played an important role in the City of Downey Rooftop Concerts, the Dia de los Muertos Festival, the art exhibits tied to the October and January Symphony Concerts, and numerous other events. More exciting activities are planned for this year. Please join us as we continue to plan and dream.

Agenda Item:  Extension of Board of Directors Term
thru December 2016 to Coincide with the DAC Fiscal Year

Recently the DAC board realized that our current bylaws require that the election of the board is tied to the fiscal year. Recently, DAC changed its fiscal year to match the calendar year to simplify tax filings. With the change in fiscal year, this would require that a new board election take place the last December, even though the current board was just elected in May and was to serve a one-year term.

The Board recommends that the current board be extended through December 2016, to align its terms to the new fiscal year. This recommendation requires a general membership decision, and the board asks the membership to discuss and vote on this at the February meeting.

If approved, the board would remain as is through December 2016. Should the membership disapprove this recommendation, the board will immediately form a nominating committee to recommend new candidates, and call an election as soon as possible.