This weekend, as part of the Downey Symphony Orchestra concert November 2, 2013, join us for a special exhibit by photographer Carolina Estrada-Del Toro, in the lobby of the Downey Civic Theatre before the concert.  Doors open at 7:00PM.  To enter the lobby you must have tickets for the symphony concert, available at the box office, by phone, or online.

Carolina Del Toro has also curated a gallery of work from local artists, celebrating Dia de los Muertos, as part of the Dia de los Muertos Festival held this year for the first time at the Downey Civic Theatre campus.  The theatre isa 8435 Firestone Blvd (and Brookshire) next to Mimi’s Cafe.

The festival takes place Sunday November 3rd from 11AM to 8PM and is free to the public, featuring art, film, music, dance, gifts, beer and wine.

Carolina Estrada-Del Toro grew up in Tecuala, Nayarit; Mexico. At the age of 17 she immigrated to California and enrolled herself at Roosevelt High School. After starting a family, her calling to nature and photography became stronger and that is when her husband encouraged her to enroll in photography classes. She fell in love with the darkroom, but after receiving a macro lens as a gift, she discovered a completely different world of colors, patterns, and overwhelming wonder. She found herself happiest looking through the lens, freeing herself from past emotional scars she thought were too deep to overcome. Her photography creates a close up vision of nature that makes the viewer take a second look. She sees a different world in the depths of nature and without the use of editing software turns flowers, insects, and leaves into mysterious and striking portraits.

Carolina’s photographs have been exhibited at several galleries in LA and Ventura counties.  As a founding member of the Downey Arts Coalition,  she curated a monthly art show called Art on the Vine, which brought artists and a more vibrant art community to South East LA.  Carolina supports not-for-profit organizations and has donated several of her photographs to fundraiser events.

Downey Arts Coalition is proud of our collaboration with the Downey Theatre and the Downey Symphony Orchestra.

During Saturday’s concert, the members of the Downey Symphony will show off their talents as they perform one of the most popular symphonies in classical music, Dvorak’s New World Symphony.  The concert also features the winner of our 2012 DSO Young Artist Competition, Joseph Morris, as he performs Mozart’s beautiful Clarinet Concerto, K. 622. 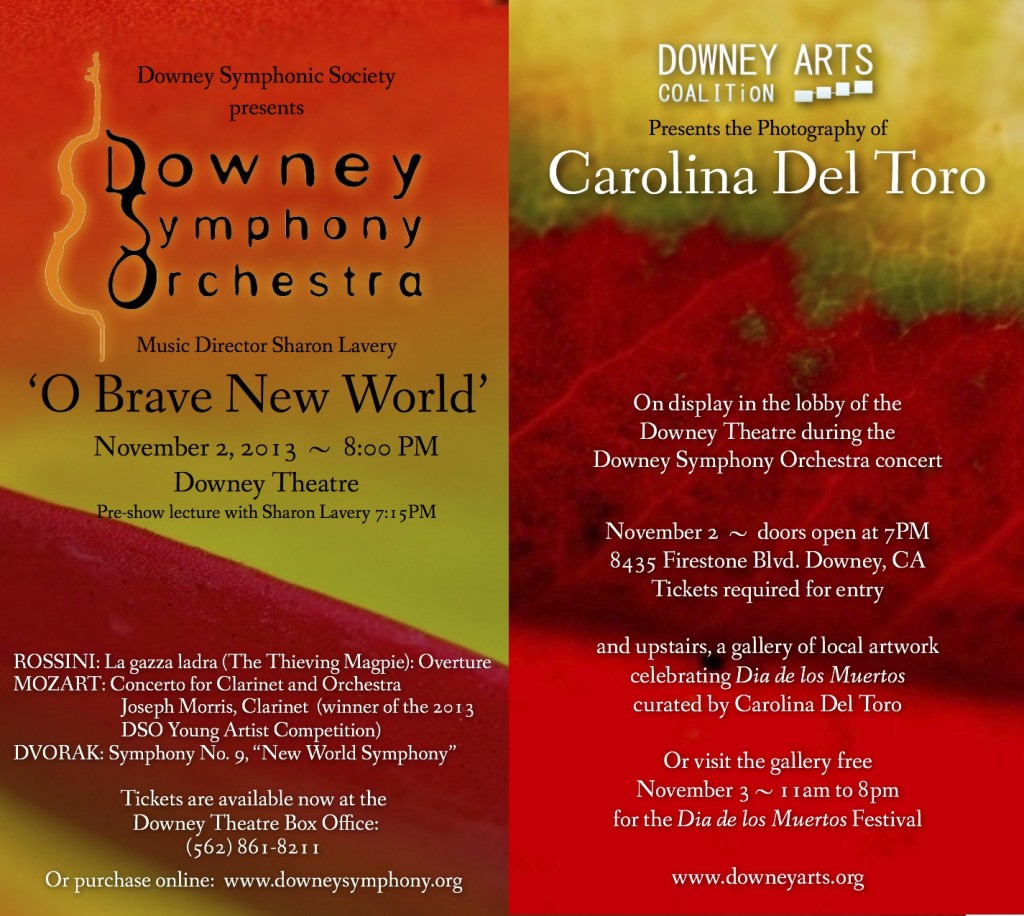