On Tuesday the Downey City Council voted to contract with the company, VenueTech Management Group LLC to take over management operations at the Downey Theatre, and to bring a presenting series of concerts with headline acts to the theatre. The official new story is up at the Downey Patriot:

This is big news, because it’s a right turn away from the “status quo” that has run our theatre for the last 30 years.

A bit of history first. Dan Furman (Furman Park) was the first city superintendent of parks & recreation, what is now the Director of Community Services. He met actor John Hume in 1955, who was in town performing for a storefront theatre that was producing shows on Downey Avenue. The idea: start a children’s theatre in Downey that would perform at the Rio Hondo Elementary school auditorium. The Downey Children’s Theatre was birthed, and the idea took off like wildfire. Hundreds of children came to audition, leading to the strong involvement of the community. Very soon the children’s theatre was doing 10 or 11 plays a year, entertaining thousands of residents. It out-grew Rio Hondo very quickly. 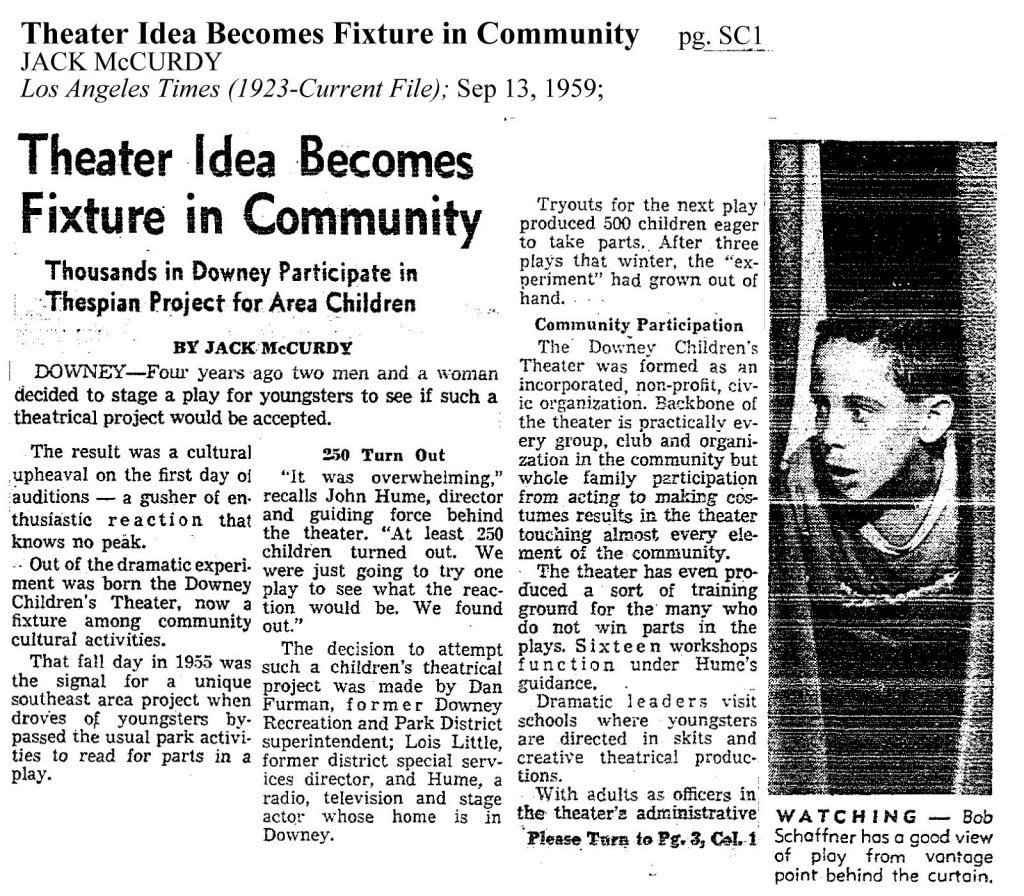 John Hume, a city employee, lobbied along with other civic leaders for the city to build a theatre. The symphony wanted a 1000 seat house, the theatre wanted only 500. 738 was the compromise. It took a long time and much controversy, but in 1970 the city used cigarette taxes to fund the project. In 1971, the theatre had it’s first banner year. No longer was the city doing only children’s theatre, but also adult plays, experimental plays like “No Exit,” the civic light opera, marionette theatre, and everything in between. Hume was the theatre’s managing director, as well as director of many of the plays. 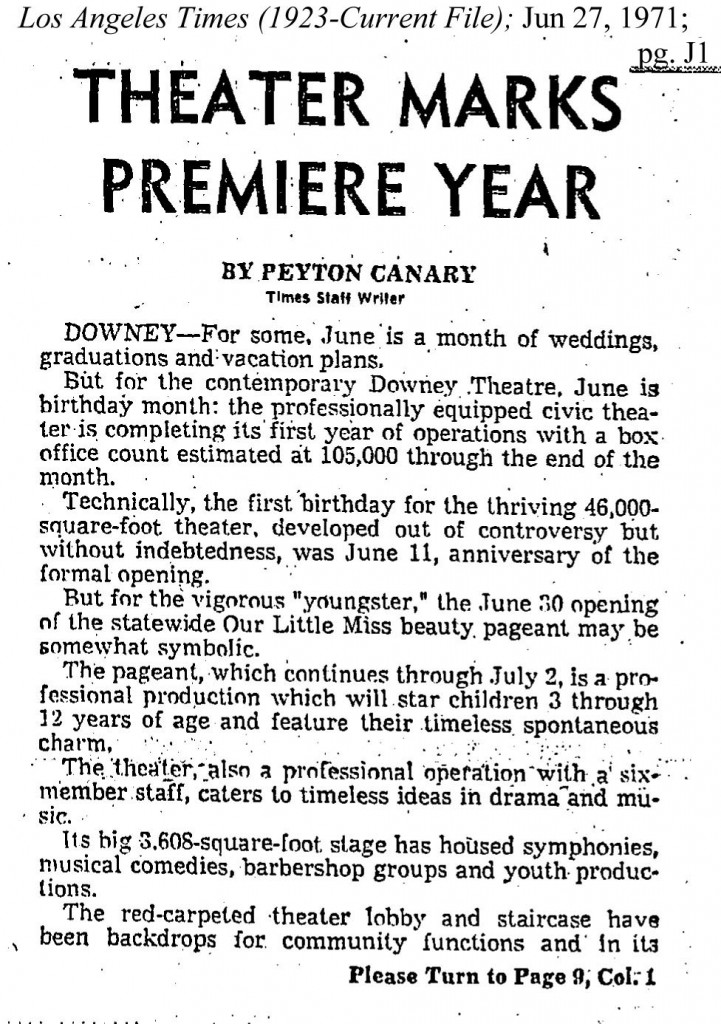 Then prop 13 happened (restricting property tax rates), leading to the budget crisis of 1978. Among the deep cuts, Hume and his staff were let go, and the theatre operation was stripped down to a minimum. The Downey community arts groups rallied to form a coalition that would continue to operate the theatre with an all-volunteer non-profit model, but that lasted only until 1982 when the city took control of the theatre once again. By now all of the theatre programs shut down except for the profitable Downey Civic Light Opera which continues to run today. 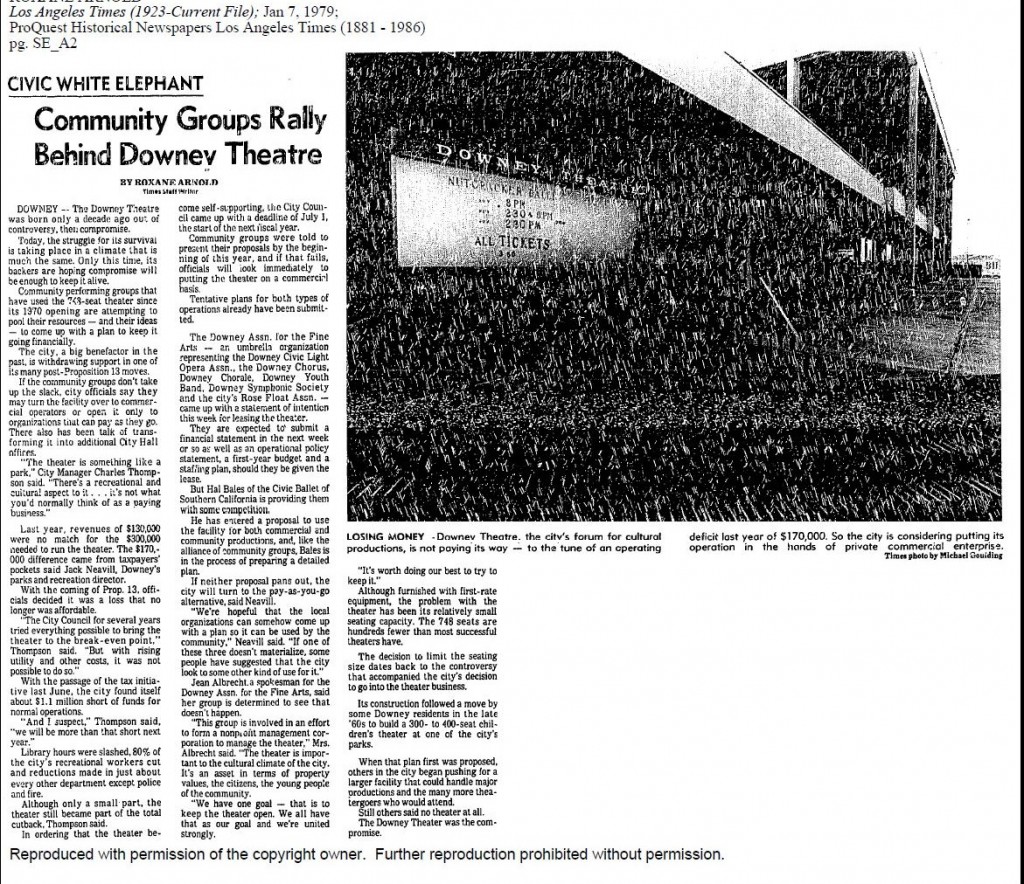 In 1983, Kevin O’Connor was hired to be the new managing director of the theatre. His first year he even put on a season of 5 performing arts concerts that broke even. I’m not sure if or how long he continued to do that, but it also was eventually left on the sidelines. For a number of years the city also produced the “Way Outer Broadway” talent contest for young talented artists at the theatre, but when the director of that program retired, so did it.

The Downey Theatre slowly settled into it’s passive rental model that it is today, while other local theatres continued to pursue performing arts acts or resident companies to keep the theatre busy. The Civic Light Opera began to contract and settle in to the model it is today, three musicals of 10 performances each, managing to mostly break even financially without the help of many wealthy patron donors (an amazing feat in these trying days for community theatre). The Downey Symphony has also survived despite challenges, now presenting 3 or 4 concerts a year and usually operating at break-even. Kevin O’Connor continued to keep the theatre as-is, without any major upgrades, marketing or attempts to modernize the box office. After 25 years his final salary was nearly $200,000/year. He retired in 2008 and has not been replaced.

Along comes 2009, the city of Downey has purchased the shuttered historic Avenue Theatre in a state of disrepair, and announces plans to convert it to a housing development. Downey’s preservationists (George Redfox, Kathy Perez and others) coming off a major success with Jonny’s Broiler, now turned their sights on the Avenue. A “Save the Avenue” campaign was started, as well as a renewed call by others such as Lawrence Christon for the city of Downey to take a hard look at the arts as an important stimulant of culture, community identity and economic development. “Save the Avenue” was met by the city’s reply of “We have the Downey Theatre, we don’t need the Avenue.” Which begged the question: What are we doing with the Downey Theatre? The theatre is dark more than 2/3 of the year. The city council responded with the subcommittee of David Gafin, Roger Brossmer along with Community Services Director Thad Phillips looking into the potential of a private operator to come in and take over management of the theatre. In Brossmer’s words, “We don’t know how to manage a theatre– let’s find somebody that does.” Good call. Honestly, to find a suitable private company that would be interested was a long-shot. VenueTech happens to be a great fit for our size. None of the other proposals were even close to what we were looking for.

A few important things to note about VenueTech: They’re big into involving the community. They want the city and it’s residents to have ownership of our theatre, and for their name to be completely unknown to the patrons of the theatre. The DCLO, Symphony, school concerts, and local artist groups are a major part of their plan for revitalizing the theatre. With marketing and increased awareness of the big-picture of the theatre, these programs can flourish. The presenting series will complement– but for any act or headliner that they might bring in, they want to be sure that it’s a good fit for our audience. They also want to throw a series of arts-oriented festivals that will take place on the theatre grounds and the courtyard that will bring local artists and residents together around an arts setting. One of their first jobs will be to create a non-profit “Downey Theatre Foundation” that will be community run in order to organize fundraising and volunteer efforts. They want to implement a ticket surcharge for all events that will go into pool a fund that young and developing artists can apply to for financial assistance with new projects. Lastly, most of these changes will take time, and are focused on long-term development.

I’m hoping this new non-profit can provide a framework and training for our community advocates to learn how to fund-raise and start new programs to stimulate local talent and developing artists. Having acts like Chris Botti playing at the theatre is nice, but it doesn’t develop Downey’s own artistic voice. That’s why I’m excited about VenueTech’s stated desire to work with the community– hopefully it will give us a better chance to take ownership.

There was resistance at the council meeting, mostly due to part of the community feeling rail-roaded into this new regime. Has this been thoroughly thought through? Are they going to push aside our city organizations for their own agenda? Do we have unrealistic hopes about what the Downey Theatre can be? I do think that the city should have tried harder to bring together more of the local arts community to hear VenueTech’s proposal and presentation, before the night of the city council meeting. In fact, if it wasn’t for the fact that I saw this on the agenda and emailed everybody I knew about it, half of the arts people who were there to listen wouldn’t have been there. They mentioned at the council meeting that VenueTech had the opportunity to meet with the DCLO, the Symphony, and the school district. Two people were there– a rep of the symphony and Marsha Moode of the DCLO. The presentation was made, but from what I hear, there wasn’t much discussion (on our part) beyond protecting dates on the schedule and rental rates.

The future is still uncertain, but so far it’s at least a change with a lot of good potential. An arts renaissance must come from a city’s resident’s, not the city staff and council, that’s the part that I’m more concerned with. I put out a renewed call to the city council during the meeting: Form an official city “arts task force.” To talk about these issues on a monthly basis and come up with a framework for Downey’s approach to the arts. How hard can that be?